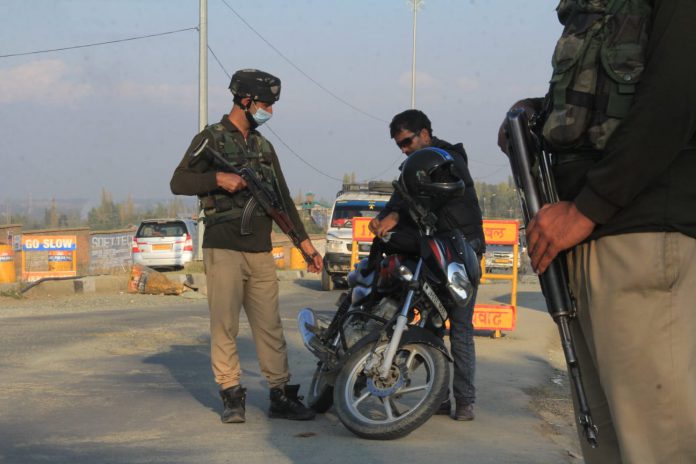 The Jammu and Kashmir police have seized thousands of bikes across Kashmir since Monday thus bringing the lives of the people to halt.

In Kashmir, where bikes are being seized, people use bikes as a mode of transport to carry out businesses and attend work. The action followed the civilian killings in Kashmir as at least 12 civilians, including non-locals were killed in October.

Several bikers told The Kashmir Walla that the police did not tell them the reason for the seizure of their bikes, leaving them worried and many without the ability to continue their daily work.

Shaik Ismail, who works as a medical representative, said that he was on his way to work when his bike was seized outside Soura police station “for no apparent reason”.

“I am entirely dependent on my bike to do my work,” said Shaik. “I have to visit many places in a day. And I always carry all the documents while travelling, still my bike was seized.”

Furqan Ahmad, a resident of Rainawari said that his bike was seized at Fateh Kadal despite carrying all the documents along with him.

“The police just stopped me and took away the keys of my bike. Despite showing them all the documents, I was told to come back after 25 October to collect my bike,” he said.

With seizure of bikes, internet service has also been snapped for hours in some parts of Kashmir for the past some days.

Local residents suspect that the police action was part of Home Minister Amit Shah’s visit, however police denied and said that seizure of bikes and suspension of internet was related to “terror violences”.

“Seizing of some bikes and shutting down the internet of some towers is purely related to militancy violences. It has nothing to do with visit of the Hon’ble HM [Home Minister],” the Kashmir police chief said.

The crackdown on bikers has hit the business as many outlets in the region are using bikes to provide services and delivery of goods to their customers.

A food outlet delivering in the Srinagar city has been facing a crisis as several private bikes hired by the outlet have been seized by the police.

Rayees Ahmad, owner of the Tiffin Aww who was awarded last month by the Lieutenant Governor of Jammu and Kashmir in the category of social entrepreneurship has been facing hardships in delivering food to its customers.

“We receive nearly hundred orders for the food in a day but due to seizure of bikes associated with us we are hardly able to deliver around 40 orders a day. Two bikes and our car also have been seized by the police,” said Ahmad.

He said that only two personalised bikes branded with stickers of Tiffin Aaw are in service, but police many times stopped them but  “after pleading they were allowed to go,” he said.

Ahmad said that they have pressed cars into service to deliver food to avoid the losses. “We are now using cars to deliver food but that has increased expenses on transport and has delayed service. We are going in loss,” said Ahmad, adding that “on my wedding service of Tiffin Aaw did not stop but now delivery of the orders has been hit by nearly 50 percent.”

Another local entrepreneur, Sami Ullah, who is running city’s one of the largest delivery service, FastBeetle, took to twitter: “Our operations continue to be at halt due to incessant seizing of our delivery bikes in the city.”

Awarded by the Lieutenant Governor last month Sami Ullah added, “just when the businesses in Kashmir were trying to recover from the losses caused during article 370 [abrogation of special status of Jammu and Kashmir and simultaneous blackout]  and global pandemic, our law and order is crumbling us again and again.”

Former Chief Minister of Jammu and Kashmir, Mehbooba Mufti, on Friday hit out at the current dispensation saying, “contrary to Government of India’ claims of providing jobs, they are snatching jobs”.

Reacting to the police action, Mufti said: “J-K admin’s recent spree of seizing bikes in Kashmir is a collective punishment and another way to snatch whatever means Kashmiri youth have to earn their livelihood in a dignified manner.”