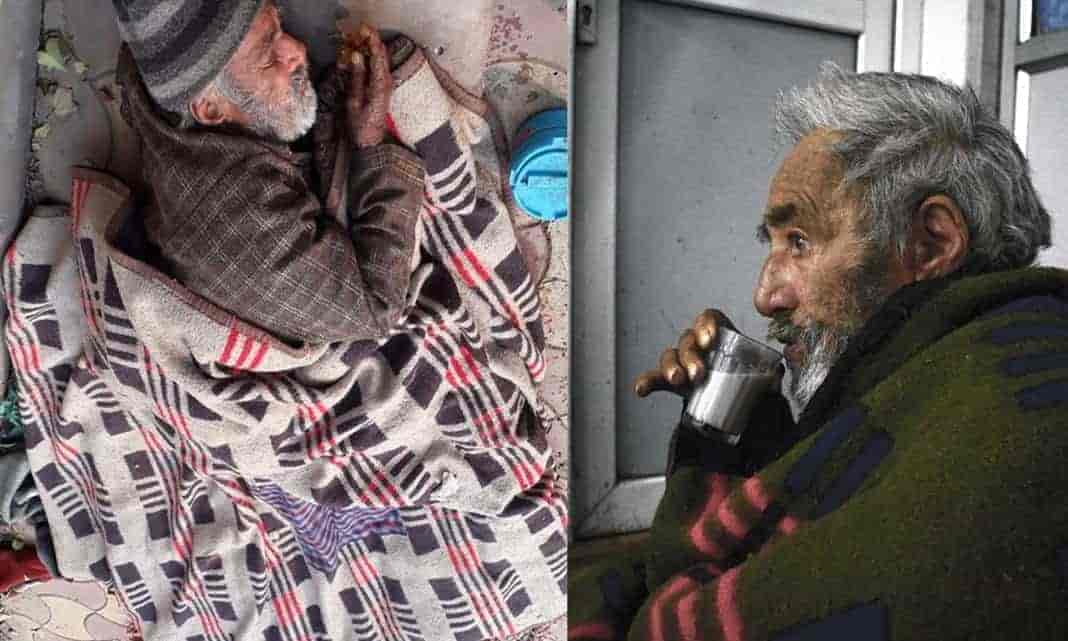 Ghulam Nabi Mir, a Kashmiri transgender, sleeping (left) on the footpath outside the Srinagar UN Office; Mir having tea on Thursday morning at SMHS hospital. Photograph by Bhat Burhan for The Kashmir Walla

On Thursday early morning, The Kashmir Walla went to see her, and the first sentence she spoke was, “I don’t want to talk to you.”

Overshadowed by volatile conflict in Kashmir, abandoned transgender cases found for the last few years, Mir is one of them. She has been roaming on the roads of Srinagar, struggling to find shelter to lay her feeble body.

Mir, a resident of Nopora village of north Kashmir’s Bandipora district has been abandoned by her family, who seem to have no interest to seek her whereabouts.

Transgender community in Kashmir has been struggling for a long time due to the social stigma associated with it. In view of that, they are also struggling to develop a small community, working in different fields amid struggle and hardships.

Mir, muted, shivered, had laid her body on a thin torn blanket on the cement tile floor of the hospital in November cold of the winter season. She had put her head over the torn muddy shoes. While rubbing her left hand with right one, one could spot a few scars.

In National Legal Services Authority vs Union of India, 2014, the Supreme Court recognized transgender people as the “third gender” and affirmed that the social, political and cultural rights guaranteed by the Constitution apply to them as well.

Yet, transgender people in Kashmir live a life of penury and social exclusion. Though transgender communities have existed for centuries, they were kept out of historical accounts and ignored by the academia.

Facing the wrath of family members, including her brother’s, Mir ran away from her house four months ago. Since then she has been roaming in the city for shelter and food. It was only a few days ago when she was spotted outside the UN office in Sonwar area of Srinagar city, sleeping on a footpath.

“My family’s attitude was ill towards me,” adds Mir. “I am in the city for a couple of months now after my exodus from home. Then I decided to leave my home.” Cursing over her condition and harsh treatment by her family, Mir has spent many nights at roadsides.

Unless they demanded otherwise, she said, transgender people would be treated as being below the poverty line. They would all get free life and medical insurance as well as a monthly sustenance pension for those aged 60 and above and registered with the Social Welfare Department.

Sipping tea with shivered hand, Mir said that she has pain in stomach and refused to take bread. She added that some hospital staff had given her some medicines for that when she arrived at the hospital on Tuesday after facing a lot of problems on the footpath.

After Mir finished her tea, she took her torn blanket over her chest and said, “I cannot walk properly, as my leg has been operated three years ago. I faced an accident at my town that damaged my leg.”

Needs shelter and food, not medication

After speaking to Dr. Khan Khawar, Registrar of Internal Medicine at the SMHS hospital about Mir, he told The Kashmir Walla that she was brought to the hospital by some activists including one namely, Dr. Aijaz Ahmad Bund, on Tuesday. “The doctors had examined the person properly, but, they found her normal. But, accompanied people pressed the hospital authorities to keep her under observation,” said Dr. Khawar, who was on night duty on the intervening night of Wednesday and Thursday.

As per the doctors, they have not found any grave medical condition in Mir, for which she has to be at the hospital. “Basically, she is abandoned by her family,” said Dr. Khawar. “Such patients are mentally disturbed, need shelter, food, and care. But the hospital is not the place where we can accommodate such people, such patients need a hospice or a shelter home”

Mir was allowed to take shelter by the hospital authorities on humanitarian grounds. But, continuing her shelter is not possible as the hospital has the inflow of patients. “We receive numerous pellet and other injuries along with hundreds of regular emergencies, it is very hard to allow her for a long time,” added Dr. Khawar, who had met Mir around dawn on Thursday.

The hospital authorities had contacted activist Dr. Aijaz Ahmad Bund about Mir. But, as per Dr. Khawar, Bund’s answer was to keep Mir at the hospital for more days to examine her physiological conditions.

“We accepted his [Bund’s] suggestion but to treat any patient in the hospital, there should be any person to accompany him or her,” said Dr. Khawar. “But, somehow Mr. Bund hesitated and ran from the proposal. It is not just to upload a picture of any such case on social media and do activism over them. There should be some serious practical groundwork for rehabilitation of such abandoned people, they need ‘rehabilitation’ not ‘institutionalisation’.”

Activist responsed, says there are no shelter homes

However, The Kashmir Walla reached out to Dr. Aijaz Bund for his response on this and he said that nothing like that actually happened. “On 25 November morning we got a call and we rushed to the spot and we cried for help,” said Bund. “We are just two people who are involved in this. We gave her clothes to change and tried to find shelter home but there is no such home here. We posted on Facebook if anyone can help.”

“We had already filed an application at the high court yesterday about this person that he shall be traced and given necessary. Dr. Khawar also saw her on the floor but didn’t provide any bed at the hospital. He was insisting that I should be there and we are only two people.”

Meanwhile, Bund also adds that the Srinagar Mayor responded to social media post and said that the person is being shifted to hospital. “He [Mayor] called the concerned police station and arranged an ambulance; we accompanied too and she was shifted to hospital. Meanwhile, she has no medical condition as such. Doctors denied even going near to her because she was stinking. Somehow we tried to stabilize the person as dogs had already gathered to attack her.”

“For last two days we have been receiving calls from hospital administration to take her out but where can we take? This person seems like she has dementia as she was not able to even give her name. She needs shelter and care,” he added.