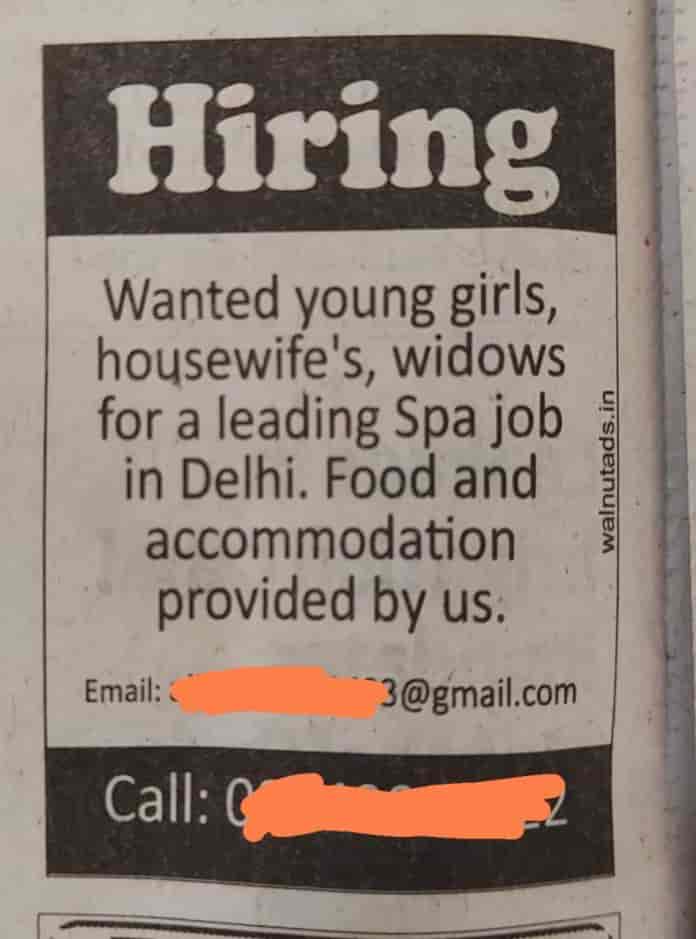 An advertisement – seeking girls, house wives and widows for a leading spa in Delhi – that featured on Kashmir’s leading newspaper has caused shock and anger in the region.

The advertisement placed by Walnut Adverstisers on Greater Kashmir newspaper had sought “girls, house wife’s, widows for a leading spa in New Delhi” – a euphemism for sleazy work.

“Food and accommodation provided by us,” the advertisement further added.

The Kashmir Walla reached out to the number provided on the advertisement who said: “We didn’t give any advertisement”. He immediately snapped the call.

Ever since the advertisement was flagged by a user on social media, the newspaper faced severe backlash which prompted it to issue a clarification.

Greater Kashmir in a statement said it regretted the publication of the advertisement.

“We regret the inadvertent publication of a classified ad titled ‘HIRING’ on page 4 in Sunday edition of Greater Kashmir. The ad was placed by an advertising agency Walnut ads,” it said.

“We have placed a disclaimer on all advertisements that our organisation is not responsible for contents or claims of any ads. Still we regret inadvertent publication of this classified ad. We apologise to our valued readers for any inconvenience caused by the ad. We will ensure that such ads are not published in our paper in future. Besides, we are investigating further the contents of the ad with the advertising agency Walnut Ads,” it said.

Previous articleWatch | Kashmir Pandits celebrate Janamashthami in Srinagar
Next articlePAGD has given up on the promises made to people: Altaf Bukhari