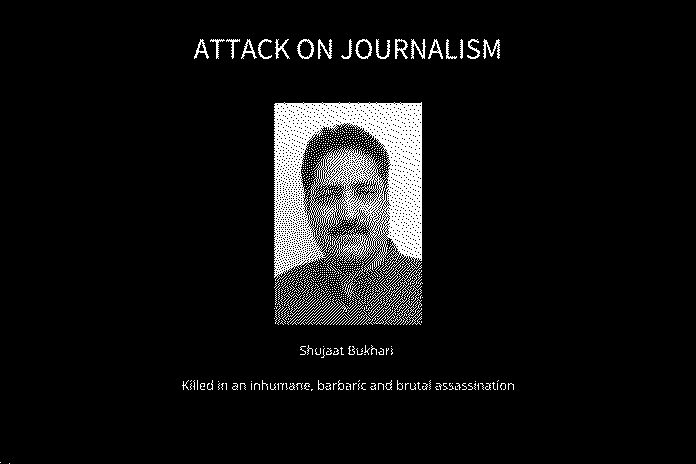 “The martyrdom of Shujat Bukhari has further exposed the vicious agendas of Indian forces. India is upto suppressing every voice that is vocal about its state terrorism. If the Indian Prime Minister and Army Chief can visit Aurangzeb then why not Asifa?! The pro-Indian politicians are talking about India’s war crimes just for their selfish political agendas but their role for pushing the people into slavery is well-recognized,” he added.

In Jammu Kashmir, we offer the eid prayers alongside the funeral processions of our Martyrs. But mere a single report on Jammu Kashmir is insufficient. The solution to Jammu Kashmir Conflict is of utter importance,” he said. Shah said that “we have been of the same opinion as of the expressions of Ghulam Nabi Azad and others since the beginning. India is upto bringing back the Era of Jagmohan by imposing the Governor law so as to sabotage the infrastructure and commit massacre of innocents. It is a move to further intensify the mass killings.”

“Mehbooba Mufti has strived to her excellence in establishing the agenda of RSS in the Valley and Jammu. 8 lakh Indian forces are committing atrocities in Jammu Kashmir. The people are being suppressed down into slavery by excessive force. But the immense sacrifices by the people of Jammu Kashmir have rendered the likes of Operation All-Out as complete failures. The cease-fire was mere a drama. It was intended for covert targets, not for the peacekeeping developments.” “India is frustrated for its failure in sabotaging the indigenous freedom struggle since four years. India is doomed for failure in all its conspiracies and vicious tactics,” he said.

Shah said that “India is a terrorist state. The whole nation is standing united against India’s terrorsim. If the India forces continue to sabotage our homes, then their own homes will be jeopardized and will not be spared.”