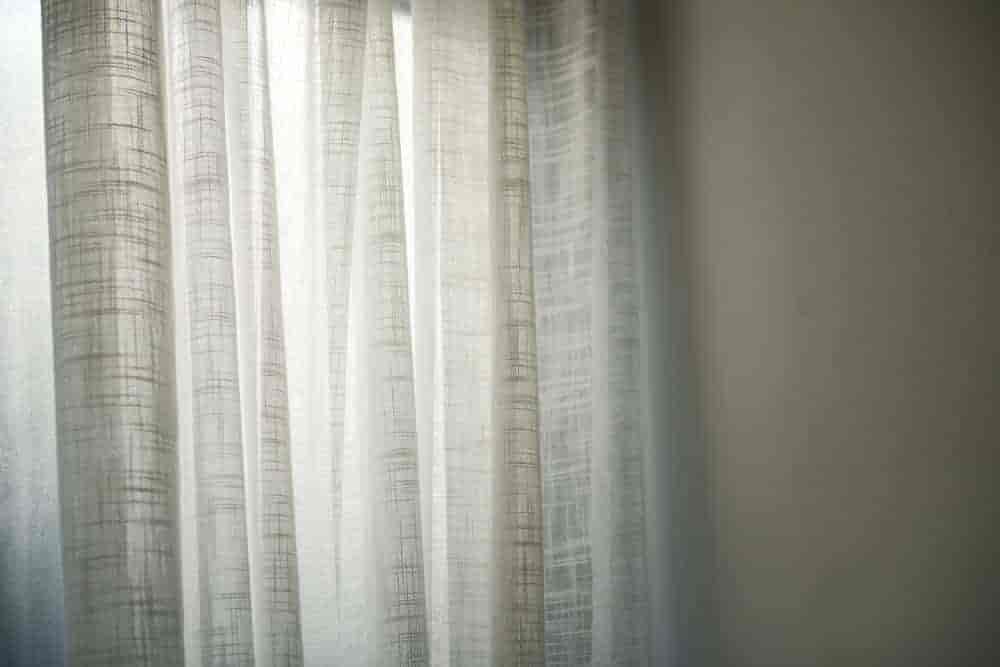 The air was moist from yesterday’s rain and the sun rose reluctantly as if struggling for space, choked by the gushing wind. She sat there without much opinion about the weather, staring at the window as if her gaze would somehow push it open. The curtains were drawn to the centre, which seemed to be closing in on her. Her sight readjusted itself to the white curtains that stood like a veil between her and the the world outside. The swaying sheer white curtains bore baroque work on them. She thought of the time when she bought them from a local market making sure it aesthetically blended with their room. She chose a paisley, self-designed curtain, which would be noticed and appreciated by him. The window behind was swollen from the moisture it was repetitively smothered with day after night, thus refusing to close completely. The gap let in some cold moist wind within the room and made the curtains flair within, like a lung to the chest.

She kept knitting a pattern in meditative silence. 62 knit rooms in one row of mauve colored wool. She hoped Lila would come and serve her breakfast but she didn’t want to call for her. Lila worked best without being checked on. Her rocking chair was as still as any other furniture in the room but she still chose this over other reclining chairs. The heave of wind kept growing and receding as if it was breathing through her thoughts. Her trails of thoughts were as long as a row of knit. With every change of row her thoughts shuffled themselves, sometimes in continuation to an earlier thought or sometimes a new thought. There was rhythm to her fingers that synchronized with her thoughts as if the gaps, breaks and pauses behaved as punctuation. At the last quarter of her life, she associated most with her hobbies than anybody or anything else.

Lila did not appear for a long time, getting Mrs. S worried and anxious. Her fear was not restricted to a possibility of loss or detachment but extended to the vulnerability of her dependency on Lila. Her isolation was her volition, then why did she periodically, almost daily suffer from conflicting thoughts of estrangement and longing for them? Each time Lila made uninformed disappearances like today, her mind would graze over the failures and losses of her life in an infinite pattern. Like the saying ‘thoughts begets thoughts’, she was never free from the trappings of her mind but neither did she reveal or display any signs of it.

Suddenly in the blur of her thoughts she found Lila nearly bawling at her for not listening. Mrs. S jerked up, dropped her needle and immediately cried about losing her knit count because of Lila.

Instead, in a strict disciplinary manner, she informed her about dinner being laid and to finish it well before ten o’clock. Their relationship was not that of master and helper, nor was it about friendship. Maybe it was about companionship and synchronization of feelings, that of loneliness for one and solitude for the other.

The hollow silence of the night that followed came to engulf Mrs. S without notice. The room was a shade of colorless black that neither terrified nor reassured her. It was heavy, distant and overbearing. She had a peculiar relationship with nights that made her detest and embrace these hours all the same. She was fond of them yet answerable to them.

The night questioned her. Or rather she questioned the night. Questioned her about the previous night, the night preceding the previous night, and about all the earlier nights since that night. That night when everything came to a standstill, a dead-end, an unprecedented halt.  Every thought seemed to cease there. Years had passed, even decades but that night, those few hours defined her years to come. It was a nightmare she couldn’t wake up from and one that relentlessly shadowed her. She wanted to erase it from her memory, her skin, her mind, her heart, herself. But it remained a futile effort.

The night of 4 August 1961 during the numb hours of 3:25 am she stayed awake in the dreadful anticipation of some kind of evil harbinger. Her mind pacing the room as her feet would if she had the courage to walk about in a houseful of opposition. In these moments of trepidation, she ruminated of the better days preceding that night. A wonderful paradox of mind is to abruptly play the days of contentment exactly at the hour of foreboding danger, almost without consent.

In a time-lapse of memory run she recalled the day of a street demonstration in which she participated at the age of 19, when rebellious emotions were at its peak. It was a demonstration against the enemy class and was popularly coined as class action. The party’s extreme factions were led by local indigenous leaders and cadres and with every new day, agitations fanned out across new geographies. Miss S (now Mrs.) was an exception to the movement with family members working in government occupied positions and armchair political dissents were their only permissible involvement with matters of state.

They met in the heat of things when he strongly objected to her membership in the party and her attendance in union groups and meetings, partially because of her womanhood and partially because of her family’s non-political disposition. It took her months to reassure them and more importantly him, that she wasn’t a spy or a potential traitor. She told them about her personal stand on the exploitation of unprivileged farmers, thus gradually creating an image of oneness with them. Over months his reluctance waned and he assented to her participation but with stricter rules and constant supervision of her movements. Miss S was evidently disturbed about being under surveillance but her honest motivations to fight against class enemy took no heed to it.

Within a matter of few years Miss S and he were hosting guerrilla warfare in the east, gradually becoming the face of the party. They, that place and their times became the hotbed of anti-class activity and soon became the abominable topic of discussion in get-togethers conducted by bungalow owners and lawn mowers. They were being written and dreaded about in the same sentence. But Miss S and he became indomitable where their minds, hearts and soul were in complete alignment with the cause. Their relationship was founded on ideology, unyielding empathy for the marginalized, books of revolution and supreme faith in the distant dream of justice. Commoners were afraid of those books as if reading them exposed the mind to a lethal allergy whose only medicine was amputation of the mind. The state wanted them killed, but more than that they wanted possession of those books only to read them and fulfill their curiosity. Little did they know that books were merely a symptom, not the disease.

Time and again thoughts of defeat gripped them tighter than imaginations of meeting death. Death, meaning a separation from their thoughts and the company of each other’s warmth was alarming but neither unimaginable nor improbable. They lived in the present with a constant pressing hope for a non-discriminatory future, a prospective day when unborn people will live better than them and thank them through their existence. They had to fight for that right here, right now without wasting a moment.

That morning Miss S was leaning towards him for comfort and support, speaking in a language that had no words but only pregnant silences and eyes full of hope and hearts full of desire. What lay in front of them, beyond those doors were theirs yet belonged to everybody – a kind of freedom which grew when shared. That day was the final day of local protest after which they will shift the agitation for right to farmer’s land to the capital, to the creator of law and order, who thought of them as miscreants of the society. Nobody knew what they will be asked to give up or begged to compromise on. But giving up was neither an option nor a permissible emotion.

After a silent collection of thoughts, Miss S checked the time and got up to get ready. He did the same and they ate something anticipating the situation that they may not get a chance to eat for some time now. She walked towards the door, opened it and froze with paralysis of reaction which he could not read. In that very moment she turned towards the wall trying to tell him to close the door but he misread it and kept one foot forward from where she could see the laser mark on his forehead and before she could pull him in his head had exploded spilling the blood of revolution on the walls they were leaning for comfort just minutes ago.

Mrs. S sat up startled at this imagery of that unforgiving day once again thinking of what they would become if he was with her, reading on current political affairs on a chair beside her on this cold winter night.

In the Shrine of Laurence