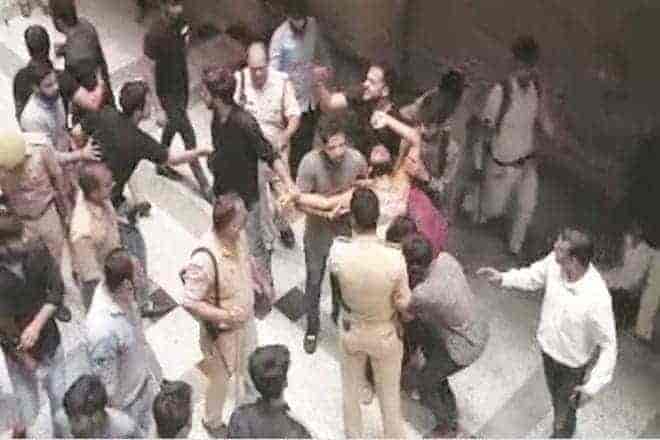 Police has booked more than 350 students were booked for rioting and related offences after a Kashmiri student was beaten up after a fight broke out between groups of Indian and Afghanistan students at a private university in Greater Noida Thursday.

The scuffle follows another incident which was reported on Monday after a video surfaced on social media purportedly showing three Afghan students at the Sharda University roughing up the student.

“A Kashmiri was roughed up by other Indian students who is said to have posted provocative messages on a WhatsApp group from the side of the Afghan students involved in the fight on Monday. These Indian students were apparently aggrieved over the university’s lackadaisical approach on the matter,” a senior police official told PTI.

The police official, who did not wish to be named, alleged lack of cooperation from the university and said, “The officials of the deemed university have gone careless on the matter simmering since Monday and that has led to this situation.”

There was no official response from the university over the incident till the filing of this report Thursday night, although the university announced that classes would remain suspended till Sunday.

A meeting was held by the university after Thursday’s incident following which three students allegedly involved in the Monday fight were suspended.

“During the period a probe will be held to ascertain the cause of the fight and action taken against those guilty,” another police official said.

According to the official, no official complaint was made to the police about the scuffle that broke out Thursday in which one Kashmiri student suffered injuries and was taken to a hospital.

Police force was deployed outside the university along with security personnel of the PAC. The university had also stepped up security on its premises and denied entry to outsiders, including the press.

“The police have taken the cognisance of the case on its own. The Kashmiri student has suffered minor injuries, more of punches and slaps, but was sent for medical examination so that it could be checked if there is any internal injury or not,” the police official told PTI.

“We have booked 350-400 students, Indians and Afghans both, and we are probing the matter. Students are being identified on the basis of the footage that has surfaced and we will soon quiz them and initiate action,” he said.

The policeman said the case has been booked under Indian Penal Code Sections 147 (punishment for rioting), 504 (intentional insult with intent to provoke breach of the peace), 506 (criminal intimidation), 323 (voluntarily causing hurt), 352 (assault or criminal force otherwise than on grave provocation), and related offences and the FIR has been filed at the Knowledge Park police station.

The police have also charged the students under the Section 7 of The Criminal Law Amendment Act, 1932, which pertains to any act that impedes another person from doing what they can rightfully do, using intimidation, he said.

The PAC was removed later in the day while officials from the Knowledge Park and some other police stations were still deployed outside the university, he added

Previous article7 cops among 18 booked over rape of mother-daughter duo in Haryana
Next articleTwo NC workers shot dead, another injured in Srinagar