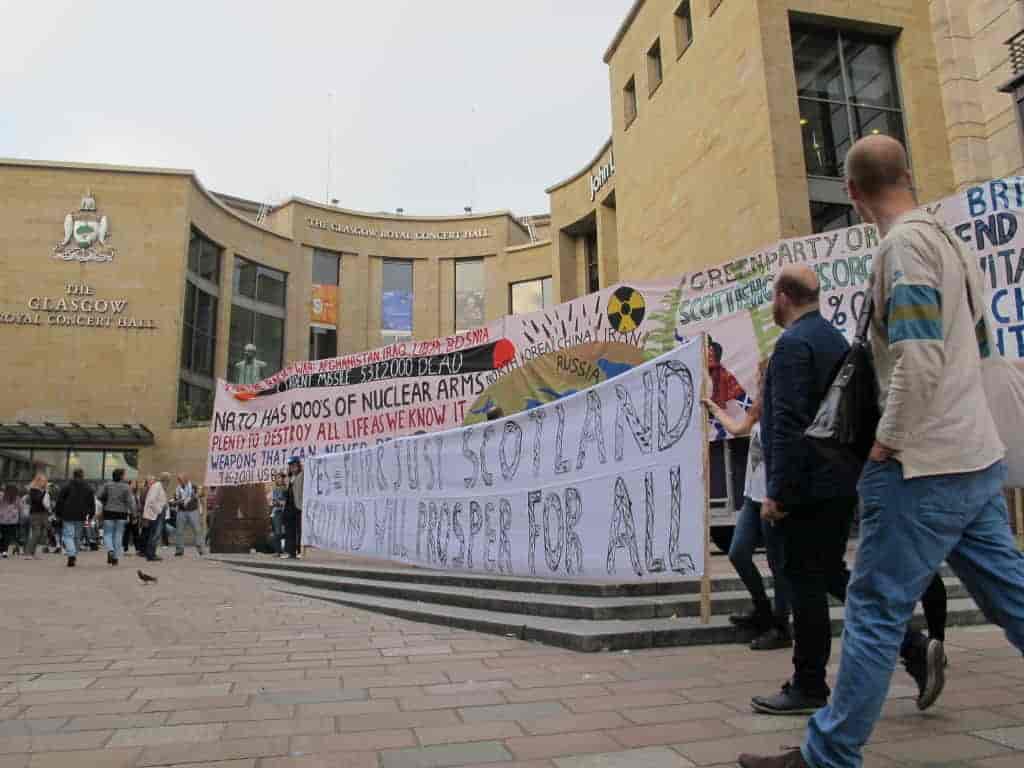 Knife-edge polls between Yes and No mean it remains unknown whether or not people living in the United Kingdom will wake up on Friday to find the union is no longer. Scotland is within a whisker of voting for self-determination from the UK, breaking a union lasting more than 300 years. This is an extraordinary moment in UK politics that – whatever the outcome – will usher in a period of political and constitutional uncertainty never seen before. Beginning our special focus on Scotland’s referendum, The Kashmir Walla’s Mark Mistry reports from ground.

By 10pm on Thursday 18 September more than four million Scots will have cast their votes answering the question ‘Should Scotland be an independent country?’

A Yes vote will herald the beginning of negotiations for the eventual independence of Scotland, whereas a No vote would usher in devolution measures giving the Scottish government more powers over tax, spending and welfare, after hasty promises by the three main Westminster parties.

As campaigning careered towards its crescendo on what could be the final weekend of the Union, The Kashmir Walla travelled to Scotland to take the temperature of a divided nation.

Scotland is a beautiful country, whether walking round the Gothic smoke-stained buildings of its capital, Edinburgh, or hiking in the highlands amid the heather. But some of the campaigning has been ugly, and there has been skulduggery on both sides.

In May this year Her Majesty’s Treasury released figures indicating the cost of establishing new departments in an independent Scotland would be £2.7bn – a substantial one off cost. It arrived at this figure by multiplying the cost of a new Whitehall department, £15m, using research by London School of Economics expert Professor Patrick Dunleavy, by the number of new departments (180) the Yes campaign said it would need. So far so good, it seemed. By the next day, however, the Treasury’s estimate had rapidly unravelled as Prof Dunleavy took to the press to denounce its dodgy accounting.

For its part, the ‘Yes’ campaign has been deliberately stoking fears that the National Health Service (NHS), renowned worldwide for being free at the point of delivery, would be in jeopardy if Scotland remained part of the union. But health is already wholly devolved to the Scottish government – though of course it has suited the Yes campaign not to correct the record.

Following on from the innovation seen in the UK before the last general election in 2010, there have been two television debates on the referendum, with the same duelling partners: Scotland’s First Minister Alex Salmond and the head of the Better Together (No) campaign, and former Labour Chancellor, Alastair Darling. In the first, Darling seemed to skewer his SNP opponent, but the second of these duels quickly descended into farce as each interrupted and spoke over one another in an ill-tempered exchange where viewers learned little.

Given the proliferation of claim and counter-claims, The Kashmir Walla travelled to Kilmarnock, in the south west of Scotland, to speak to people on the ground. Politically the area used to be a safe Labour heartland, though this has changed over time and the Scottish National Party is now dominant.

The town boasts a rich cultural history; the celebrated poet Robert Burns published his first collection there in 1786, and Nobel Prize winner Alexander Fleming, who discovered penicillin, studied at Kilmarnock Academy. Manufacturing also used to feature prominently, though it had be declining for some time before Diageo, the company behind Johnnie Walker whisky, moved elsewhere in 2012. The public sector is now the main employer in the town, according to an official at the Dick Institute, the local museum, and jobs are few.

Walking round the town The Kashmir Walla came across Kevin Heron, washing his car in the afternoon sunshine. The 39-year-old explained that he would be voting No because he didn’t believe that Alex Salmond had adequately answered the question of which currency the country would use post-independence. The Glasgow Airport baggage handler added that he wouldn’t be showing his support though, either in the windows of his house, on the corner of Glebe Road, or his car. “I’m not a political sort of person”, he said, adding matter-of-factly, “also I’d rather not get a brick through the window.”

Nina Nicol, a hair stylist at ‘A Cut Above’ salon in Sturrock Road, not far from Kevin’s house, said: “I’ve changed my mind three times and now I’m a No.”

Walking back through the town’s main shopping centre I came across the Yes campaign, its tent was pitched beside the town’s statue of Robert Burns. No expense had been spared. Parked nearby were three very new looking vans emblazoned with fresh Yes livery. People wore face paint, badges, hats and t-shirts, accessorised by small Saltires.

Linda McGregor, a 64-year-old retired social worker, and Rebecca Latchfield, spoke to The Kashmir Walla about the Yes campaign. Linda went for the economy, explaining that oil revenues spread among a population of 5 million would see living standards leap.

Meanwhile Rebecca stated clearly that she did not wish to live in a country that involved itself in illegal wars.

“Alex Salmond has kept his pledges,” she added. The distrust of further devolution promises from Westminster was palpable.

About 200 yards from the Yes campaign’s highly professional set up stood two lonely No volunteers. They didn’t belong to the No camp in any official capacity – it transpired they had each accepted a carrier bag full of leaflets and stickers after meeting members of the official No campaign earlier in the day. While the efforts of 38-year-old Jason Bryden, and his friend Gillian Cunningham, aged 28, were admirable, it didn’t permit any fair comparison of the two electoral operations. Kilmarnock’s status as swing voter territory is perhaps best underlined by the visit two days earlier of former UK Prime Minister Gordon Brown (followed on Monday by Alastair Darling himself).

The Kashmir Walla’s time in Kilmarnock unearthed divided opinions about how people will vote on Thursday, and that the politicians on both sides have significant work to do to convince the electorate of their sincerity.

Significant constitutional change is on the way in Scotland, whatever the outcome of the vote. What is less clear, however, is how to heal the rift that has emerged between the two camps, which has split families and neighbours. If the United Kingdom disappears, one hopes the Scottish people will be able to once again bind together.