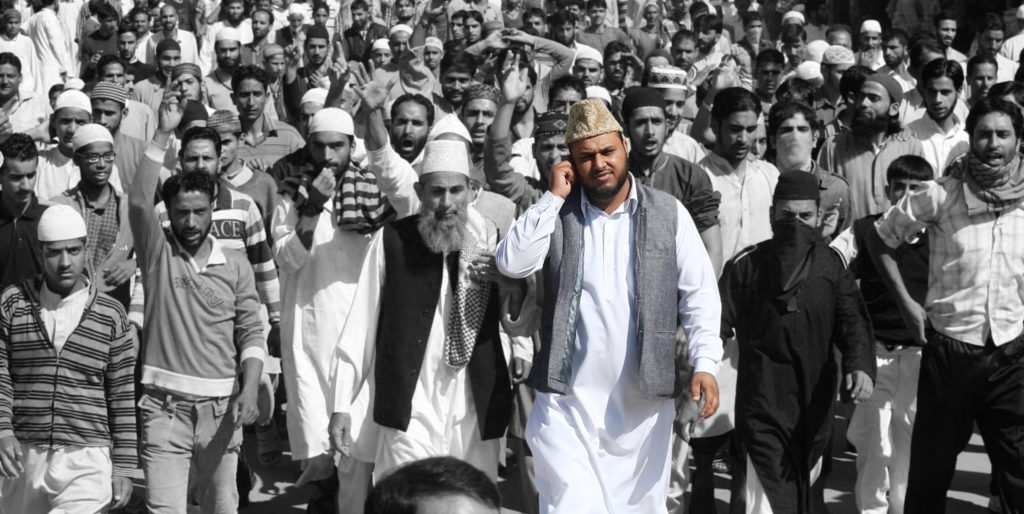 Since July 8, when popular rebel commander of Hizbul Mujahideen, Burhan Wani, was shot dead, a never before civilian uprising has been going on in Kashmir. Mass public demonstrations, rallies and a series of shutdowns responded by curfew, ban on internet, gag on media and bullets, pellets and teargas shells fired by the government forces. More than 90 civilians have been killed by the government forces, more than 13000 injured among whom around 1000 have been hit by pellets in their eyes. It has been a worst force used against civilian uprising by any government in Kashmir. To crush the dissenting voices, the government has arrested more than 7000 people including booking Muslim clerics, human rights defenders under Public Safety Act. Al most all the pro-freedom leaders have been put in jail or house arrest.

Wani was from Tral area and was killed in a Kokernag village in South Kashmir’s Anantnag district. The epicenter of this uprising has been South Kashmir, which has seen a massive crackdown launched by the government. To understand the uprising and mainly the epicenter, on behalf of The Kashmir Walla journalist Aakash Hassan spoke to the Chairman of the Ummat e Islami Jammu Kashmir and Mirwaiz of South Kashmir, Mirwaiz Qazi Ahmed Yasir, who is under detention since July 8.

Here are the edited excerpts of the interview:

How do you see the current uprising and what people actually demand?

They simply want Aazadi, nothing else.

India has been occupying Kashmir since 1947, with its fake promises of plebiscite. Everybody is concerned, and we must do something about it. It has been happening since early 1931. So, time and again it will happen until and unless people of Kashmir obtain freedom.

Why did south Kashmir become the epicenter this time?

As far as south Kashmir is concerned, it has always been in center of things in this movement and in every other movement. If you go back to 1931, we said movement has started in Kashmir. But in South Kashmir, it had already started in 1925. If you go back to the 80’s, there was a unification, which resulted in Muslim United Front (MUF). The fact is MUF, which originated from whole Kashmir, had started from Islamabad (Anantnag), which was influenced by Qadri—Qazi unification.

Then there was the 90’s, the gun started here. In 1995, unfortunately, counter-insurgency force (Ikhwan) started here. Then there was 2008. Every program that started from here resulted into something bigger. South Kashmir has been the hub of activities and that is why the movements start here. And as far as I am concerned, the rural south Kashmir is much more active, much more freedom oriented than northern rural Kashmir. South Kashmir is much proactive regarding freedom.

What about the recent dialogue process?

Any dialogue process, which will have a pre-condition that we will only talk within the Indian constitution, will have no results. Simple! It was the best available stand for them (Hurriyat). Whenever we are told that we will be allowed to talk only if we talk within the limits of (Indian) Constitution, how can we talk? They know that every person who is fighting on the streets, pelting stones, going to jails and dying, is not going to do anything within the Constitution, but for complete freedom. I am for talks and everybody, I guess, will be for talks. But those talks should not be limited and conditional. There should be triangular talks– there should be Pakistan, India and there should be Kashmiris. Then only talks can happen and we can find a bigger solution.

What about the role and authenticity of Hurriyat?

There is always a role for Hurriyat. They are those people who have given sacrifices in the struggle. If there is a time like now, where every person is out on the streets participating in the protests, then there was also a time when people were not doing something like that, but Hurriyat leaders kept it alive. So, there might be a notion from India that might say that Hurriyat has no role, but I think the Hurriyat has a bigger role than any of us can think.

How strong or weak is Hurriyat this time?

Hurriyat is quite strong and one may understand that if they stop issuing the (protest) calendars, naturally the protests will die down. Whatever is happening on the ground is on the behest of Hurriyat.

Then, if you talk of weaknesses, there is no person or organization that does not have pitfalls and drawbacks; but there is scope for improvement. Let us say that we can settle and Hurriyat can settle it down.

But this time people erupted before any Hurriyat call?

No, I will disagree on that because, when we say that people erupted before Hurriyat, you must know that just before the month of Ramadan (in May, June) Hurriyat was holding seminars regarding Sainik colonies, programs and sit-ins against Pandit colonies. Then there were many things that people came to know– eruption was a result of those activities.

Do you see Islamic radicalization in Kashmir?

Radicalization is a misused word. Basically, it is just a word given by the West to the persons who are attached to the religion. They want Muslims to not offer Namaz (prayer), they want Muslims to not offer their duties. But if radicalization is not up to its notion, which it is being given, I will say every person should be radical. If my religion tells me to offer Namaz, or anything else, I will, even if that is radicalism. And my religion does not tell me to kill innocent people, or bomb innocent peoples’ villages.

How do you see the current uprising in Kashmir?

How is this movement different from the previous movements?

Yes! It is different.

When we talk of 2010, that movement was more concentrated in urban areas, there were killings mostly in towns and Srinagar city. But this time, these protests and killings have been happening in the rural areas. There is a shift. And it is a good shift. There was a time when some people would say this is a movement of two and a half districts. Those people should realize that this is from south to north of Kashmir. Every part and every village of Kashmir is participating in it and they want Aazadi.

There is one more thing. Those people, who had voted in the previous elections, have come out to protest. Even some of the actively participating people in mainstream parties have also got killed in protests. Maybe in future rural population may vote but they still want Aazadi.

What is the reason of the shift in this movement?

There are some reasons, primarily; administration caged the people of towns after the killing of Burhan Wani, expecting protests. But they were not expecting the protests to happen in rural belts and fringe areas. But it happened, and they were unable to handle.

How long do you think will this uprising last?

I’m not very sure about it, I don’t know, but it has already done its work it has transformed the mind of younger generation.

What according to you will be the solution at this time?

As far as the rigidity of India is concerned, right now I can’t expect anything. But the reality is that with the passage of time, with situations like this time and again, they (India) will have to bend down and understand Kashmir is a political problem and will have to be dealt politically.