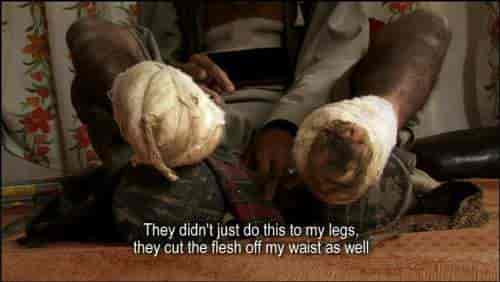 Electrocution, sexual molestation, physical beatings, moving rollers over the legs to break bones were a few methods of torture used by Indian troops to torture people in Kashmir that the International Committee of The Red Cross (ICRC) told the United States officials in India in 2005. Revealed by the whistleblower, Wikileaks, in 2010, the report said that the tortured victims were not “Islamist insurgents or Pakistani-backed militants” but were civilians. According to the report 1,296 detainees from Kashmir were interviewed. Among them 681 had told ICRC that they were tortured by using different methods like 498 electrocuted, 381 suspended from the ceiling, 304 sexually tortured, 294 victims’ legs crushed and 181 victims’ legs pulled apart into the splits. Some of them were tortured with multiple methods.

Indian-controlled Kashmir, continuing to be ruled by India, over the years has gone through its worst phase soon after the armed resistance that started in late 80s. Thousands of Kashmiris were arrested, accusing them of being with rebels. Several of them were tortured in the police stations and army camps. There were particular torture from where, it is said, no one returned alive. One of them was Papa 2 on the banks of the Dal Lake which has been converted into an official residence now.

In his late 50s, Abdul Rehman Tantray, from North Kashmir’s Varmul district – 60 kilometers away from the summer capital Srinagar, was imprisoned for three years by the joint team of “Army and Police” in 1992.

“I was at my work place when they arrived and asked about my relative Showkat Ahmad Sheikh, a rebel associated with the Hizbul Muhajideen (a Pakistan based rebel outfit) who joined jihad in 1989. But when I replied that how could I provide you the information as I have no contact with him, they assaulted me ruthlessly in front of everyone in the market. They dragged me into a vehicle and took me to a torture camp at Varmul,” says Rehman, in his room wearing a woolen cloak and a bulky woolen skull cap. A streak of light coming in through a hole in the window curtain makes his half face shine.

The illegal detention of Rehman followed the visit of few more officials to the camp to seek information about Showkat Ahmad. His truth turned out to be just the beginning for the assault by the police and army.

“In the beginning they kept me naked in an aloof room for several days to raise a level of fear about torture. Then they took me to a torture room and tied my hands to ceiling and began to beat ruthlessly with bamboo sticks and leather belts for half an hour,” Rehman recalls.

After the first day of torture, Rehman guessed the kind of torture he will be facing from the troops. The prediction about the future days of detention seemed challenging to him. “One day during that period four to five men dragged me to a torture cell; placed me on a chair, tied hands and feet with ropes, began their regular activity of harassing and beating,” Rehman continues, adding that his usual answer that he has no clue about Showkat’s location made his torturers so angry that they called for more objects used during the torture.

“They switched on the high voltage lamps and positioned them straight toward my eyes. It made me feel like blind, tears came out like the water from a running tap and my ribs ached due to continuous beating,” Rehman says, while pointing that his ribs are weak since then. “I kept shouting, ‘I’m not lying. I don’t know anything about him. I swear I have no clue about his hideout,’ but they never stopped and continued beating me with bamboo sticks.”

A few moments later cold water was mixed with the chilli powder and Rehman’s head was dipped in it. He still remembers the pain of caused due to the chilli water. “I fell unconscious after that for about thirty minutes. When I regained my senses, they smeared the same water around my eyes. They brought a bottle of acid from which they made me to drink a few gulps which burnt my throat,” Rehman adds.

Rehman attributes the adverse condition of his health as an outcome of the unjustified torture by the police and army forces. The torture didn’t stop there, it continued on and on. “They stretched my legs, rolled a roller over them and my back for several minutes,” adding this, Rehman also believes that the dislocation of his back bone is a consequence of that torture.

After three years, Rehman was released in 1995, but he thinks that he was released only because of the intervention of the higher officials after his family members “approached and begged” before them. He also says that another cause for the release was his consistent negative answers to their questions.

While Rehman was being tortured, his family was running from pillar to post to seek his release. “That was the worst time for my family. They didn’t even have shoes to wear. If there would not have been the relatives, they might have died,” he says.

Rehman says his children were warned and harassed at public places. “They were accused of helping their Uncle for the ‘terrorist activities’ which discouraged them a lot and one of them could even finish school due to fear. After my release I shifted from the main Varmul to Fatehpora but Police and Army continued to harass us there. Then, in 1997, I was again arrested under the same charges and was released after six months,” amid Rehman speaking, his older son, Farooq Ahmad Tantray, 28, steps in the room.

Farooq adds to his father’s words, saying that not only his father was arrested but they suffered a lot as well. “My younger brother Manzoor Ahmad Tantray (22) and I spent eight and five months in prison respectively under same charges of helping our uncle to carry out the ‘terrorist activities’.”

In 2006, Rehman’s house was set ablaze by “52 RR” (Rashtriya Rifles) by throwing “5 hand grenades at it.” “We were lucky that we survived in that deadly strike. My relatives and friends helped me to reconstruct the house but still some people think that I was provided the compensation by government for the construction. That is not true. I never received a penny from anyone,” Rehman says, loudly.

After the continuous suspension toward him and social alienation, Rehman joined the pro-resistance group Hurriyat Confrence (G) led by SAS Geelani, in 2008. After this he was arrested for “promoting stone throwing,” and “paying young boys” who came out on streets during 2008-2010 mass uprisings against the Indian rule.

He is facing the trial at Sopore and Baramulla courts. “Although I have to spend a lot of money on my case proceedings but I don’t need any compensation from the Government and will continue to fight for the cause of freedom,” he retorts.