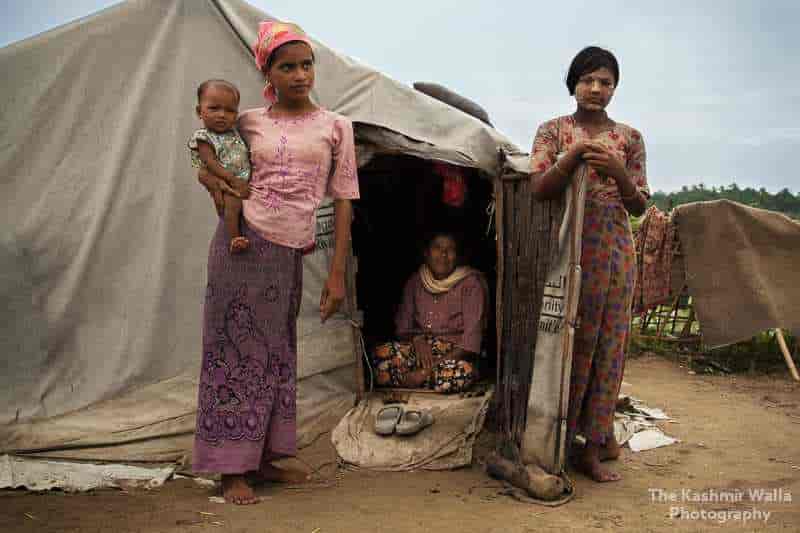 As with most of the world and its regions, in particular South East Asia’s the Republic of the union of Myanmar (Burma), its history and human inhabitants come from varied settlers, wandering tribes and conquering armies. The land lies on the Bay of Bengal and Andaman coast with Bangladesh and India to the west, Laos and Thailand to the east and China to the north.

These surrounding lands have brought with it the Mon and Pyu from India and the dominant Bamar (Burmese’s) from Tibet. History has shown this empire decrease under the Chinese and increase via conquests over Thailand and India.

Besides the Bamar Myanmar is home to many minority ethnic groups, each with its distinct cultures, traditions and languages. In addition to the minorities who are predominately in the states, Myanmar is also home to ethnic Chinese and Indians their ancestor dates to colonial periods.

During the Anglo- Burmese war (1824-1886) Britain conquered Burma and it was administrated as a region of India until 1937.  This country was very much disputed over during the Second World War as allies tried to fight the Japanese from invading Asia. The Burmese allied themselves with the Japanese to drive out the English occupiers and gain independence. Sadly this was met with deceit from the brutal occupying Japanese and soon the Burmese realised the British colonisation had been better for its people. At the end of  World War 11 in 1948 under the leadership of the father of Burmese Independence Aung San, the country started negotiations with Britain and gained Independence to create the Union of Burma.

States, which were of different ethnic identities, and had centuries of disputes all reached an agreement to submit to collective governance. In 1961 after more than 10 years of civil unrest and conflict the power of 200 tribes, the Shan people, the Kachin, the Red Karen, Chin peoples, the Mon, the Karen and the Rakhine met with the central government authorises to draft up a new form of government which would allow tribal self determination and autonomy within a federal system. The Rohingya were excluded.

The Rohingya who are a Muslim minority group predominantly from North Rakhine state were not permitted to take part in self determination. The Rohingya are a minority of Myanmar Burma settling in the region of Arakan on the western borders of Bangladesh. Rohingya’s can trace their ancestry back to 1400 BC as the first Muslims to settle the land of Arakan and were serving in the court of Buddhist King Narameikhla (Nim Saw Mun). Unrest in this region dates back to 1785 when brutal Buddhist Burmese from the south conquered Arakan, killing thousands of Rohingya men and driving out over 30,000 people to Bengal India.

During the Anglo Burmese war encouragement from British for the Rohingya to resettle their unpopulated lands was met with strong disdain by the Buddhist Rakhine living in Arakan. With the progression of fighting during World War 11 the British were occupied in battling the Japanese, leaving the Rohingya to defend themselves, increased ethnic tension lead to massacres between the Rohingya and Rakhine. At this period the Burmese Rakhine were still allied with the Japanese who inflected heinous crimes such as rape, murder, torture, and execution against the Rohingya. Thousands of Arkanese Rohingya facing persecution once again fled into Bengal.

In 1962, the new government was never formed and General Ne Win lead a coup d’etat and ousted the democratically elected government and installed himself to power as the leader. General Ne Win was a military leader and self appointed president  from 1962 to 1988.  His regime installed the 1982 citizenship law. The Rohingya advocated a separate nation for themselves in Arakan, the military junta cracked down hard on the Rohingya for their right to self determination and denied them citizenship in their own country defining them instead as “stateless Bengalis”.

The United Nations have long considered Myanmar’s almost 1 million Arakan Rohingya people as one of the most persecuted ethnic minorities on the planet. They are stripped of citizenship and today the right of protection, provided by citizenship has never been greater. They are vulnerable because as stateless people they could live and die without leaving a trace, as the 2012 clashes has shown.

Classified as illegal foreigners by Burmese state legislation, they have been deprived of basic social, civil, human and economic rights for more than 40 years. As a result of the 1982 Citizenship Law, the Rohingya are denied the ability to work legally, have access to health services, access to basic education, participation in the political, legal and economic process of the country, open a bank account, obtain protection from the law, obtain Identification papers and the right to marry or own property. This leaves this minority group vulnerable to extortion, forced labor, religious persecution, human rights abuses, violations and poverty. Statelessness paralyses them to a difficult and precarious existence plagued by poverty and abuse. Seen as outsiders they are unwelcome and unwanted on every piece of land their feet steps upon.

In June and October 2012, inter-communal violence erupted and marked the culmination of ethnic tensions between Arakanese Buddhists and Rohingya Muslims in Rakhine state. This conflict was classified by Human Rights Watch as a crime against humanity and a brutal campaign of ethnic cleansing.

“This situation must not become an opportunity to permanently remove an unwelcome community, we are deeply concerned about the assertion of the government and others that the Rohingya are illegal immigrants and stateless persons. If a country is to be successful in the process of democratic transition, it must be bold in addressing the human rights challenges that exists. In the case of the of Rakhine state, this involves addressing the long standing endemic discrimination against the Rohingya community that exists within sections of the local and national government as well as society at large”

As a direct result of the violence inflicted on this minority group a large number of the Rohingya population has had to flee and live a life of exile in neighbouring countries. There are also more than 125,000 who have sought refuge in unregistered IDP (internally displaced person) camps in different regions of Rakhine state in the northwestern part of Myanmar/ Burma.

The Rohingya constituted a minority that must be protected according to international minority rights standards. The government must take steps to review relevant laws and procedures to provide equal access by the Rohingya community to citizenship, promote dialogue and reconciliation between communities

For the number who have sought refuge in IDP camps the challenges and adversity does not cease, they are suffering extreme insecurity, exploitation, and imprisonment in IDP camps. Internal security denies access of humanitarian aid to the camps and barred by immigration security forces, they are forbidden from accessing markets, healthcare or other necessities such as clean water found outside the IDP camps. Without sanitation, access to clean water, and medical services the camps are rife with sickness and malnutrition. Refugees international has reported the camps as “utterly unacceptable misery and despair.”

The UN Refugee agency has called for authorities to restore law and order and to prevent further bloodshed and displacement. The UNHCR spokesman, Adrian Edwards has said, “We are appealing for neighbouring countries like Bangladesh to keep borders open, it is clearly important people has access to safe haven.”

United Nations states that after the violence of June to October 2012 of the 800,000 Rohingya in Myanmar an estimated 6,000 people were stranded on boats seeking refuge in Thailand, Bangladesh and India, a further 110,000 people are displaced, more than 3000 homes were destroyed, and the death toll is deemed much higher than the 180 authorities claim, of which there are no accurate figures. The systemic ethnic cleansing was so large that New York based Human Rights watch released before and after satellite images of the devastation within the Muslim quarter of Kyaukpyu where a further 811 houseboats were destroyed.

Located 120km south of Rakhine state capital Sittwe, Kyaukpya is crucial to China’s most strategic investment in Myanmar: twin pipelines that will carry oil and natural gas from the Bay of Bengal to China’s energy hungry western provinces. India was also bidding for this pipeline and lost, however India has other oil and gas projects in the area to provide to its eastern states.

According to Human Rights watch “government troops stood by and watched” as locals killed ethnic minority Kaman Muslims and local police shoot at Muslims fleeing the violence. Soldiers from the local border guard beat Rohingya Muslims fleeing violence from local villages arriving by boat near the Rakhine state capital Sittwe. HRW released further imagery of extensive damage of homes and property in mainly three Rohingya areas, and reported acts of “gruesome casualties” on both sides of the Buddhist-Muslim clashes, including beheadings and killings of women and children.

The HRW Asia Director Brad Adams stated: “The satellite images and eyewitness accounts reveal that local mobs, at times with official support, sought to finish the job of removing Rohingya from these areas. The absence of accountability for this horrific violence gives a green light to extermists to continue their attacks and abuses.” Since the initial start of the violence in June HRW accused security forces of opening fire on Rohingya, standing by as mobs attached and committing rape.

Faced with the silence and ignorance of the media and the international community, the Rohingya are condemned to a bleak existence. In the overcrowded IDP camps such as Te Chaung barefoot men, women and children alight from fishing boats seeking safe haven, the only little aid consists of sacks of rice from the World Food Program. Reuters saw no medical workers, on site to aid malaria suffers, the wounded and malnourished. The makeshift straw-covered structures are meant to remain a temporary solution, but these soon turn into a permanent settlement and way of life. The lack of appropriate food and shelter, clean water, sanitation, and medical care is an all too familiar story for displaced communities where desperation quickly erodes dignity and hope.

Ashok Nigam the UN resident and humanitarian coordinator said in a statement upon his return from Rakhine state, “I am gravely concerned by the fear and mistrust I saw in the eyes of the displaced people. The violence, fear, mistrust is contrary to the democratic transition, economic and social development that Myanmar is committed to.”

Myanmar’s ethnic Rohingya minorities are bound by the undeniable hostility of the Burmese and the unwelcome and neglectfulness of the neighboring countries, they seek refuge in. Stateless people are invisible to most of the world however their predicament of being denied access to citizenship impacts the world on a number of critical issues such as human trafficking, armed conflict and forced migration. In recent years despite the UK, USA, European Union and Human rights Organizations which have recognized the dire consequences of statelessness and its direct impact on human welfare and security, little has been done in terms of legislation and challenging countries like Myanmar to intimately look at the impact of the citizenship law.