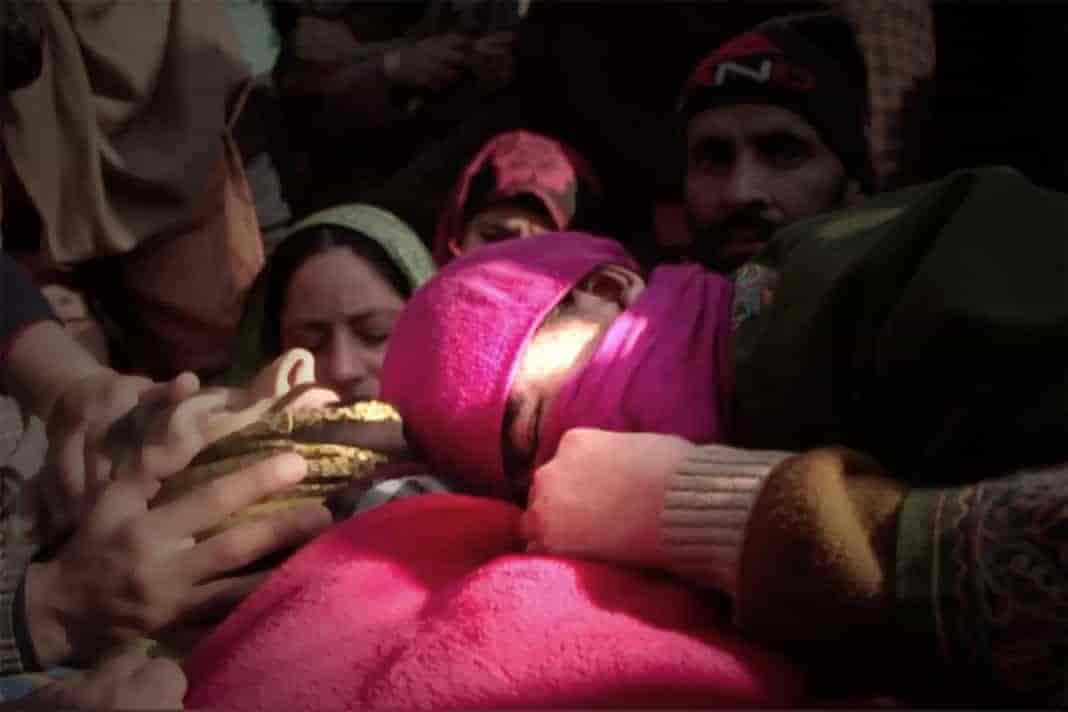 Saima, from Indonesia, was married to a Kashmiri who was shot dead on Saturday during clashes near gunfight site in Pulwama district of South Kashmir. Photograph by Vikar Syed

“Wake up! Wake up, our baby is waiting,”

Abid Hussain, 35, had started talking to Wiwiek Widiasati [later changed name to Saima] on a social media website and later Mr. Hussain, after completing his Masters in Business Administration (MBA), traveled to Indonesia in 2016.

“He met me in 2016, and we got married in Indonesia,” Ms. Saima told The Kashmir Walla. “I don’t know anyone here except him. To be honest, Kashmir is not really my home because the one I knew has already died.”

Mr. Hussain was one among the seven civilians who were shot dead during clashes at the gunfight site in Pulwama district of South Kashmir on Saturday. A cousin brother of Mr. Hussain said that on Monday they were looking for her [Saima] in the house at dawn but couldn’t find her.

“When we entered into the room she wasn’t there,” he said. “There is a local cleric who called us and said she was at the grave of her husband. We went to get her back.”

When the family members had reached at the grave, they saw her lying on it, wailing and screaming, “Wake up! Wake up, our baby is waiting.”

“For two days, she went to the graveyard on her own. But today we didn’t let her go,” added another family member. “We kept a watch on her but she stopped talking to anyone, so we took her to the graveyard around 6:30am for 10-15 minutes.”

As per the family, Ms. Saima is not returning to Indonesia anytime soon. Her colleagues from the company in Indonesia are traveling here to visit her.

“She is only crying since Abid was killed,” said Mr. Hussain’s cousin brother. “She has pictures with him [of Mr. Hussain] and keeps staring at them, calls out his name, cries and laughs at the same time.”

For Mr. Hussain, it was not only his wife and his daughter he has left behind, but Rutba, niece of Ms. Saima, too. Rutba is a class 6 student whose parents had died in an accident and was being taken care of by Saima.

When Mr. Hussain got married to Saima, he promised to take care of her niece too, so he brought her along to Kashmir.

“Abid had promised his wife not to worry ‘she is like my own daughter.'”