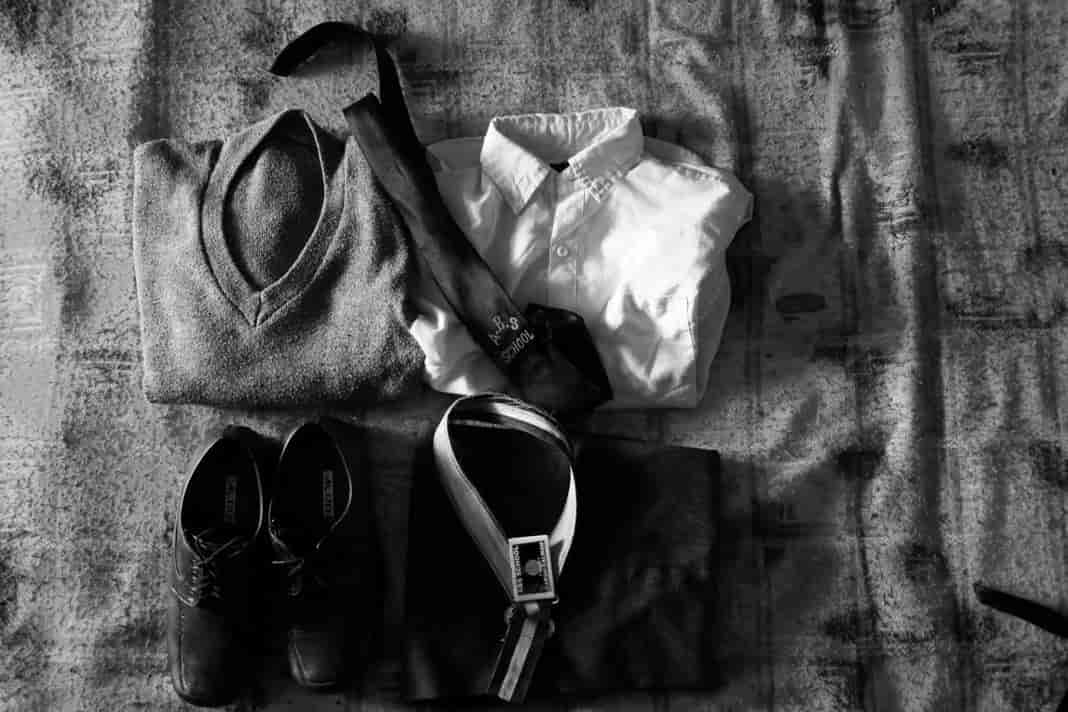 Folded uniform tells a tale: as if someone had left, never to come back, never to wear it again. A schoolboy, a dedicated student and a responsible son he was. Faizan had left his school uniform ironed on his bed. Photograph by Vikar Syed for The Kashmir Walla

Two years ago, on 9 April 2017, when the second phase of Lok Sabha by-polls of Srinagar-Budgam parliamentary constituency was on going, the brewing anger among youth led to protests and clashes in Budgam district of Central Kashmir.

The day of polls ended with 7.2% of voting percentage and the killing of nine civilians, with many others injured. Among the dead was 13-year-old Faizan Ahmad Dar, a school boy, who was killed in his native village Dalwan in Budgam.

That day after waking up, he had recited a few verses of Quran and later left for his tuition. Few hours later, Faizan’s body was found dead near a school playground, as the government forces had shot him in the back of his head. His family said that he was caught into the protests, as youth were protesting against the parliamentary by-election of Srinagar-Budgam constituency.

Faizan’s home, a two storied 70 years old house made of wood, bricks and mud is where his small family including his father, mother and two siblings live. It lies on the top of village Dalwan in district Budgam.

Faizan had spent the best moments of his life inside this ordinary yet beautiful room. The mud plastered walls were all the time surrounding him. It’s just that at first, it was a part of him and now he is a part of it.

With a goal to qualify competitive exams like IAS and KAS, Faizan would practice for the exams while he was only 13 years old. IAS, KAS and English Grammar books have all that he needed to qualify the exams. But, he has been marked absent. He won’t return to the books.

A locked silver steel trunk is a testimony to the reality of lives of Faizan’s parents. It reminds them that every cloud does not have a silver lining. Sometimes, a dark black cloud can take it all away from you. To save her from such thoughts, Faizan’s father does not let his mother enter his room. Can her thoughts be stopped; He wonders?

‘Oh! The strokes, the aim and the precision,’ recalls his family looking at Faizan’s Carom board and a Cricket bat. They look at his belongings yet they don’t dare to touch them for his touch would be buried under their touches like he lies buried in his grave.

It was a happy day. His father Fayaz Ahmad Dar gifted him this scuffed cap on Eid Ul Fitr. It lies on a dressing table in Faizan’s bedroom. It stares at the mirror, looking into which he would put it on. ‘Where did he disappear?’ they continue wondering.

His family says that Faizan would recite four chapters of the holy Quran, after offering prayers. He would wake up, offer prayers and recite Quran before leaving for his school. Nothing from this mortal world accompanied him to his grave. Yet his prayers would be of some help for him in the hereafter, they say.

IFaizan’s mother Mehbooba hugs his school bag that his tender shoulders would often carry. “Where do I find you, my doctor…where do I look for you?” she mourns before losing her consciousness.

He was supposed to put on these slippers that his father bought for him so he could attend a marriage ceremony of one of his relatives. However, he left barefoot.

“Wish you all the best,” mentioned the gift Faizan received from his school principal after winning a Quiz competition. Wishes remain as wishes, safely wrapped inside chests as feelings or as gifts of Faizan’s beloveds and he lies in his new home wishing to see them once again.

‘Consequences of Battle’ was the title of a topic he once wrote about. Ironically, he lost the battle of his life, when the deadly bullet hit his neck and he died. He lost.

The last entry in his notebook reads ‘Half day’. Perhaps the remark he wrote sealing his faith.

This Quran was his companion while he was coming back from his seminary. While coming back, a cruel bullet hit his neck, taking out the life from him. Faizan’s mother Mehbooba still tries to feel his tiny fingers on the holy book. She holds it against her chest and recalls her ordeal.

13-year-old Faizan would offer prayers on this prayer rug, five times a day, a routine he had been following. At the age of 5, he had joined a local Seminary in his village.

Faizan’s cousin looks out of a window where she usually sits after his death. Unlike other relatives, she silently wonders what went wrong with the family.

Mehbooba displays his picture that he had taken during cold freezing winters. He stands in the snow, wearing Pheran, a traditional Kashmiri cloak. Still worried about her son, she wonders how he would be lying in his grave: without clothes, in summer and during winter, during the rains and during the harsh heat.

IPeople come and go. They sit, they caress and they console. Yet the loss of this mother is inconsolable, irreparable. Neighboring women and relatives visit her often, but the one who she is silently waiting for is gone, never to return.

The path is witness to his footprints and infinite footsteps he took while walking from there. As the dust fades them away, will history forget him with time?

IIt’s a place where Faizan would join his fellows during the lunch break outside his school. They miss him with every morsel they take, with every tear they shed, with every laugh and with every passing moment.

His school bench: a place where he would dream about his aspirations. His companions still sit near the spot but he is nowhere to be seen.

Every morning, since Faizan’s death, his father comes to his grave after the morning Fajr prayers. He recites holy verses from the Quran, verses for his son. The tombstone of Faizan’s grave have his name, address and the date of his killing carved on it like its carved on the heart of his father who finds peace in nothing but sitting beside his grave.

Vikar Syed is Multimedia Editor at The Kashmir Walla.