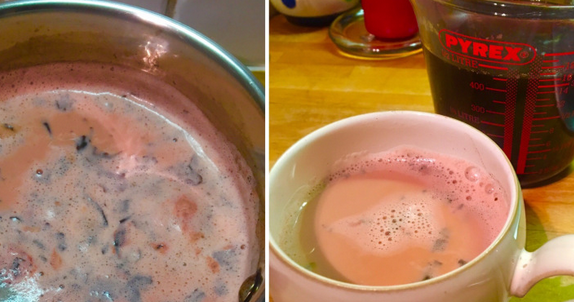 So you know if you are a non-Kashmiri, in Kashmir, and you say, ah I’d love a cup of tea – chances are you’ll end up with this beautiful pinky-mauve brew. Take a sip, and if you have never had it before, you’ll probably be taken aback when you realize that this beautiful pink tea has salt, not sugar in it. And then the confusion on your face will give you away, and your Kashmiri host will tut tut and say, you should’ve said you want Lipton tea! *Oh but I don’t mind what brand it is, as long as it’s, you know, TEA*, you might want to say, but don’t. Seriously.

Quick tea-history lesson. Turns out chai was not a very popular beverage in the Indian subcontinent right up till the early twentieth century. People were more in to their lassi (yoghurt, water, salt or sugar, all churned together) and chhaach (butter milk), and doodh (milk). Place is so hot, makes sense for people to have preferred cold hydrating drinks to hot caffeinated stuff. Turns out it was the British who popularised tea drinking in India.

The himalayan mountain settlements were always another story though. Wherever you go along the Northern Himalayas you will find people have been drinking one or another version of this salt tea for ages.

In Kashmir, chai is essentially this beautiful salty pink tea. Anything else is called *Lipton chai* because Lipton was the first brand of tea that came along selling their chai to our towns and villages. Classic first mover advantage.

So anyway – I have over the years received so many messages asking for a foolproof nun-chai recipe that I recently did a poll on my Instagram account on whether I should or shouldn’t. And 5% of you, who voted *NO*, go away, this is not for you. Hah.

It’s a bit of an art, making the perfect cup of nunchai – the colour, the consistency, the flavour. And to be honest I have only figured it out quite recently. As in I could always make nunchai, but it was a bit hit and miss – great some days, not so much on others. But I think I’ve finally cracked it. *Kottar rathh hish* – every single time (for those of you who don’t understand Kashmiri, we use some interesting metaphors – always remind me of the metaphysical poets – this here means *just like pigeon-blood*. Don’t ask me how we know what that’s even supposed to look like, but hey John Donne would’ve been proud.)

This recipe will make around 3-4 mugs full.

4-5 heaped teaspoons of Kashmiri chai – this is essentially a green tea.

4-5 pinches of soda bicarbonate – this is your magic ingredient here. Too little and your tea will be a pale pasty failure. Too much and it’ll be too bitter. So you have to get this just right. (Say hello to Goldilocks, will you.)

1-2 cups milk – I always use full fat organic. The creamier the milk the richer, lovelier your nunchai will be. In Kashmir we often add a spoonful of malai (which is essentially the layer of fat that settles on top when you boil and then cool milk) to our steaming mugs of nunchai. Pure bliss. Sigh.

There are two ways we can do this –

Traditionally this tea is brewed for a very very long time, to get the colour, flavour, etc just right – so what you do is you put your tea leaves and soda bicarb into a saucepan, then add a whole lot of water to begin with and bring it to boil on a high heat, and reduce the heat a bit, and then – let it boil, let it boil, let it boil (what? It *is* nearly Christmas!) till the water’s all but gone, and then you add another lot of water, and so and so forth till you get the brew you’re looking for. This method is fab, but does take forever.

The second method is quicker, but we start in exactly the same way – take your tea leaves and soda bicarb, and put them into a saucepan. But instead of adding a whole lot of water, pour just enough water to cover all the tea leaves, and then just a bit more, but not too much. Bring to boil on a high heat. And keep boiling it till the water’s all but gone. The add another little bit of water, boil it all down. After about 15-20 mins of doing this, you should be able to see a deep purple colour in your pan. You are basically done with the *tyotth* – which is what we call the base to which we then add water, milk and salt to turn it into nunchai. But the longer you boil it for, after this point, adding more water, as and when required, the deeper, more intense your nunchai flavour will be. So if you have time I would strongly recommend not rushing this step too much.

Once you are happy with the colour, consistency of your brew, boil it down, till very little water is left. To this then add about 2-3 cups of water, 1-2 cups of milk, and salt. Have a little taste to see if it needs more milk, more salt – and that is it, basically. Bring it all back to boil. Let it boil for a minute or two to make sure the salt is all mixed up, and you’re good to go.

Some will say, ah be sure to strain the tea leaves out when your pour your nunchai into your dainty little cups. I say, hah.

And if you are somewhere were they sell Kashmiri breads, I do not like you, don’t tell me. If like me you are far far away from a kandur – well then, homemade puffs are you best friend!

The recipe is taken from Aliya Nazki’s food blog DaanKutth.

Enforced jokes on Kashmiris: when does a comedian go too far?

With few willing to step up, Kashmir’s folk dance slowly fades away

A potter’s wish, for pottery and himself