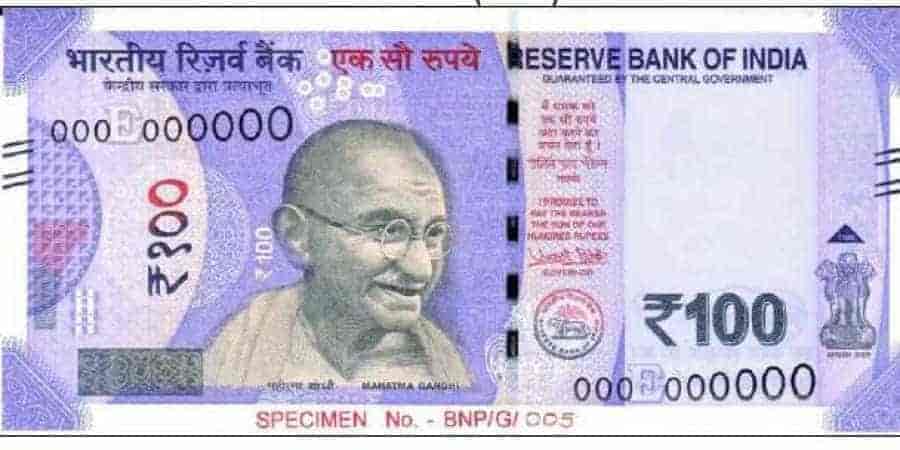 However, all the existing notes of the same denomination issued by the Reserve Bank in the earlier series will continue to be legal tender, it clarified.

The new denomination has a motif of “RANI KI VAV” on the reverse, depicting the country’s cultural heritage.

The base colour of the note is lavender and contains other designs, geometric patterns aligning with the overall colour scheme, both at the obverse and reverse. The dimension of the banknote will be 66 mm × 142 mm.

The obverse (front) side of the note contains a see-through register with denominational numeral 100, a latent image with the numeral and also a Devanagari version of the same.

It also contains a portrait of Mahatma Gandhi at the centre, with micro letters ‘RBI’, ‘????’, ‘India’ and ‘100’, along with a guarantee clause, Governor’s signature with Promise Clause and RBI emblem towards the right of Gandhi’s portrait.

On the right side of the portrait are an Ashoka Pillar emblem and electrotype (100) watermarks.

For the visually impaired, the note has an embossed printing of Mahatma Gandhi’s portrait, Ashoka Pillar emblem, raised triangular identification mark with micro-text 100, and four angular bleed lines both on the right and left sides.

On the reverse side of the note (back) is the year of printing of the note on the left, Swachh Bharat logo with the slogan, language panel, Motif of RANI KI VAV, and denominational numeral 100 in Devanagari script.