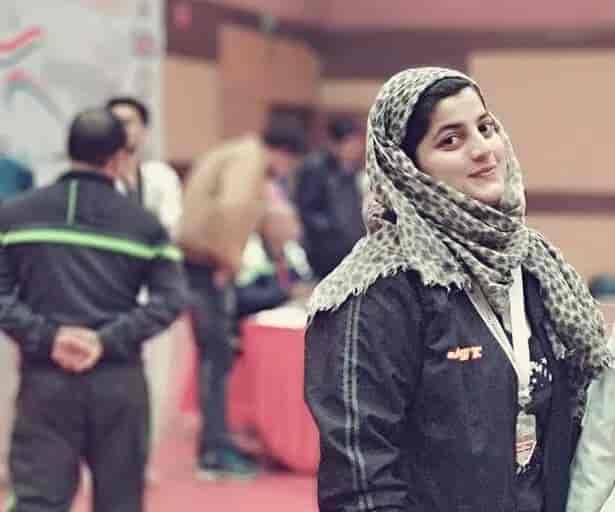 Currently teaching martial arts to dozens of girls, Syed Rashida Simnani, 21, a resident of Drabgam village in Rajpora area of Pulwama district who is currently pursuing her graduation degree from Women’s College Srinagar has so far won many medals at national and international tournaments.

Simnani while talking with a local news agency, Kashmir News Observer (KNO), said that she has been taking part in competitions since childhood and got attached to it.

Without any coach and family support initially, Simnani was selected in wrestling in a school-level competition.

“While taking part in school and district level competitions she reached the national level and became part of the national team in 2017,” she said.

“Twice I have represented J-K at the national level in baseball and in wrestling. I have won a bronze medal in wrestling,” she said, adding that during braid chopping incidents in Kashmir, she started a camp at a government school in her locality to teach women self-defence.

Simnani said later after getting training under an eight week certificate course in Health and fitness from National Sports Authority of India (NSAI) in Patiala, she was selected to represent India at international Stage in Taekwondo where she got a silver medal.

After winning medals, her family started supporting her and based on my sports achievements, she was appointed as a fitness coach on contractual basis at Women’s College Srinagar, which she continued on a volunteer basis after contract expired.

Simnani said that with a growing crime there is a need to teach girls about self defence and other basics besides that there is a need to empower girls and give them freedom of choice so that they can face any challenge bravely and choose their future themselves.

In absence of any coach and infrastructure, she wasn’t able to pursue her dream as she wanted to represent India at various levels in wrestling.

“The government especially Sports Authority of India and local sports councils must reach every athlete especially in rural areas so that their talent won’t go waste and they won’t go discouraged,” she said, adding that at present she is teaching dozens of girls wrestling and other sports in Srinagar as well as in her area. (KNO)