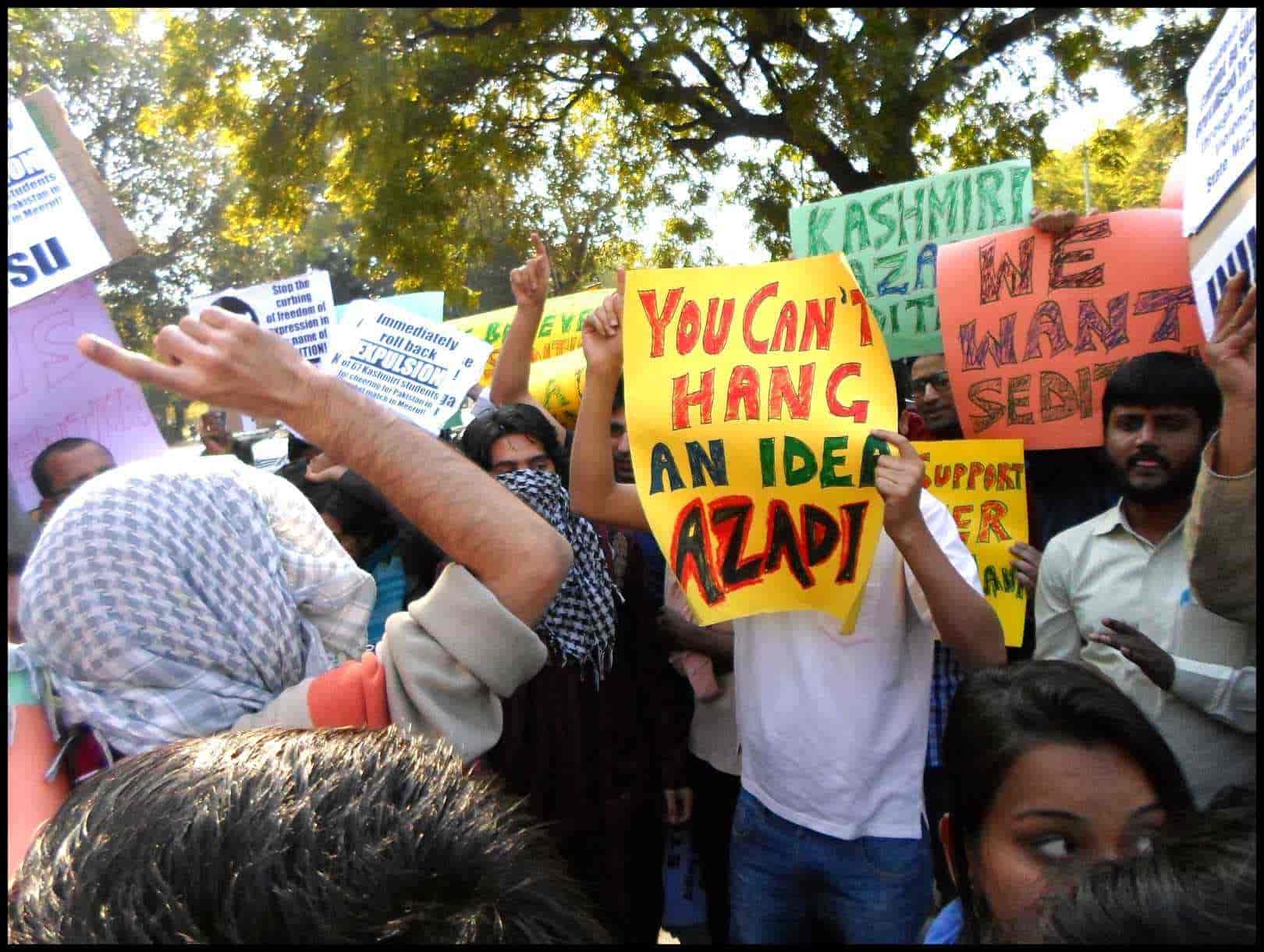 Several students in the capital city of India protested outside the Uttar Pradesh Bhawan against the harassment and eviction of 67 Kashmiri students at the Swami Vivekanand Subharti University, Meerut and the slapping of sedition charges. The protesters included activists, students from universities, mostly from Jawaharlal Nehru University and Kashmiri Students.

Raising the issue of freedom of expression, a student member of Democratic Students Union (DSU), Umar Khalid, pointing towards Narendra Modi said that the person who was responsible for genocide and mass rapes in Gujarat is free to spread his hatred agenda everywhere in the country. “The person, who should be behind the bars, is the PM [Prime Minister] candidate that shows that the only political class enjoys the freedom of expression in India,” he said at the protest.

During the protest, a few anti-Kashmir activists from Hindutva parties clashed with the protesters. A person who claimed of being Member of Parliament cited slogans “Bharat Mata ki Jai” and used abusive language against the protestors. In response to them Kashmiri students raised pro-freedom slogans. Later Police forced the protestors to leave the venue.

Khalid further added that if Kashmiri students cheer for any nation against Indian team then India must introspect itself for the reason. “In response to their right to self-determination, the atrocities are the only answer they get by the Army and the Indian Government,” he said.

Protesters were chanting “Stop Fanning Majoritorian Jingoism” slogans and were holding placards in their hands reading “Immediate roll back the expulsion.” An All India Students’ Association (AISA) member said that the Kashmiri students were beaten up when they celebrated the victory of Pakistan cricket team last Sunday, to which they retaliated.

“Following this, 67 Kashmiri students were suspended for three days from the University and were even asked to evacuate their hostels. This situation left them with no other option but to return to Kashmir for three days with their luggage. This is a shocking display of majoritarianism that seeks to turn even sports and culture into spaces of communal warmongering,” said Akbar from AISA.

However, after the outrage in Jammu and Kashmir and other parts of India against the sedition charges, the Uttar Pradesh government has dropped the charges.