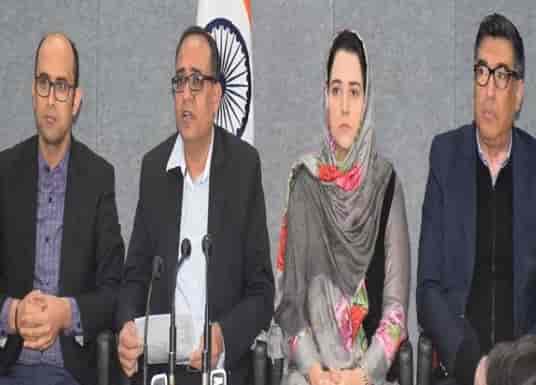 Srinagar: Dispelling apprehension about any major emergency with regard to coronavirus, Government today said that it is monitoring and reviewing the situation closely and there is no need to panic.

Addressing a press conference here today, Principal Secretary, Planning, Development & Monitoring Department, Rohit Kansal, who is also the Government Spokesperson, said that the class work up to the primary level has been suspended in six districts of Jammu and Kashmir as a precautionary measure.

“Class work up to primary level has been suspended till 31 March, 2020, in Jammu, Samba in Jammu division and Budgam, Baramulla, Srinagar and Bandipora in Kashmir Division. This is just a precautionary move and there is no need to panic”, Kansal told the media persons.

He said the government is monitoring and reviewing the situation closely, even as elaborate arrangements have been made to handle the situation.

Listing the measures taken to control and prevent the spread of the virus, he said 100% self declaration protocols have already been established at Jammu and Srinagar airports.

“All entrants to Jammu and Kashmir via road are also being monitored at Lakhanpur and Lower Munda respectively. Help desks at Railway stations, Jammu and Katra are also operational,” he said and added 100% self declaration and thermal imaging has also been introduced for all pilgrims visiting the Sri Mata Vaishno Deviji Shrine.

Regarding screening of the suspected cases, he said “287 cases were put under active surveillance; 95 of these have completed the surveillance period of 28 days.”

He informed that 28 samples of suspected cases have been sent for testing so far, 25 have reported negative, 2 have reported high viral load but final report is awaited.

He said Biometric attendance in the entire Jammu and Kashmir has also been suspended till 31 March as a precautionary measure. He said advisory against large gathering has also been issued.

“The government strongly urges all social, religious and political organizations to avoid large gatherings. We are grateful that many organizations have responded to our advice and deferred such gatherings,” he informed further.

He further urged citizens, especially those with travel history to affected countries such as China, Iran, Italy etc to self declare immediately and to report to the nearest government health facility about any symptoms.

The Principal Secretary further informed that Helplines have already been established and are functional and urged people with travel history to call the same for advice or assistance.

Responding to media queries, he said that there is no shortage of safety masks or any other equipment.

He reiterated that entire administrative machinery is fully geared to handle any challenges on this count and there is no need for any panic.

“However, we reiterate that citizens must take basic precautions such as hygiene, hand washing, respiratory etiquette. They must also report any symptoms to the medical authorities immediately,” he added.