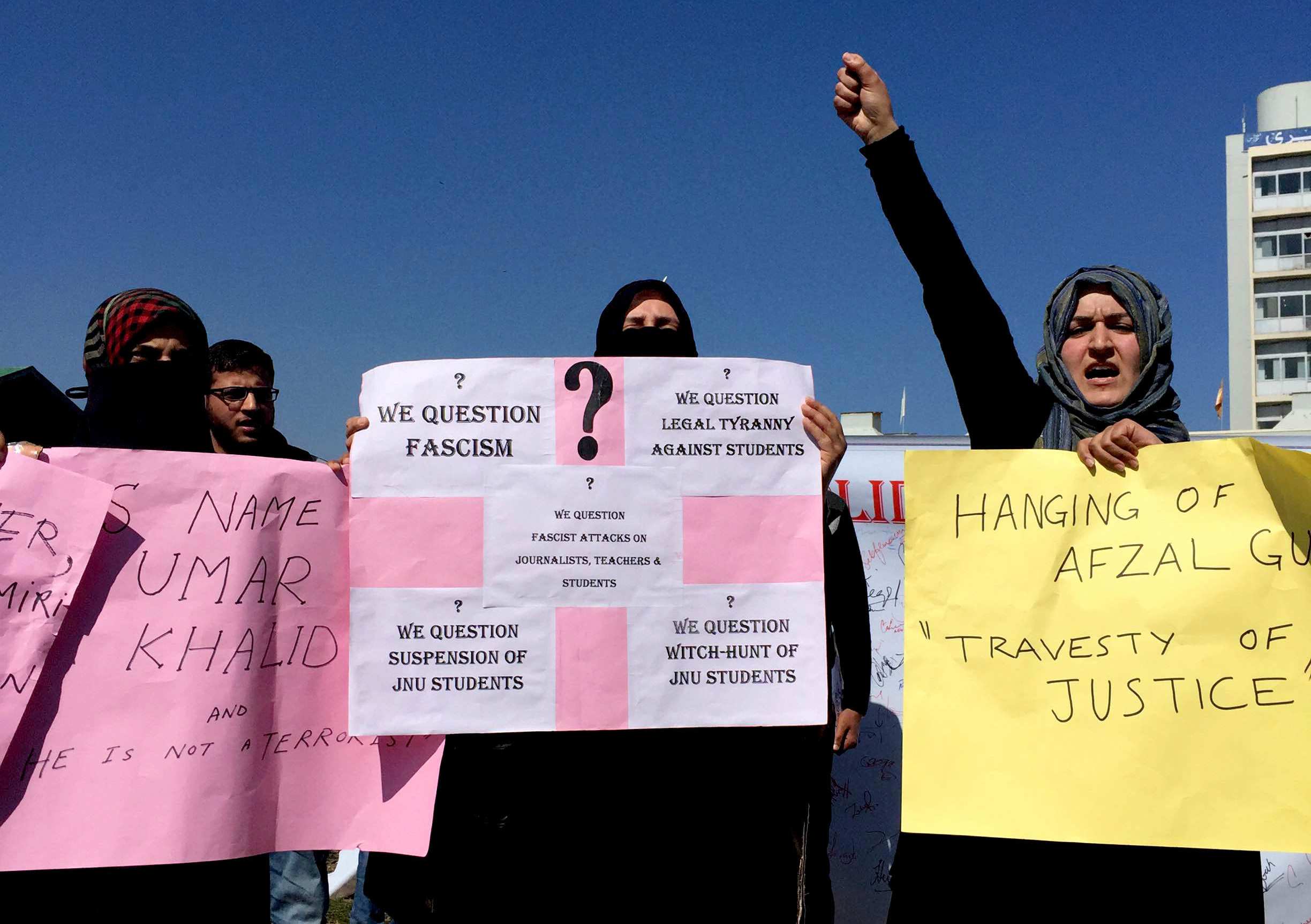 Note by the author: End number of articles was written in recent days ranging from journalists to activists, professors to research scholars in India and abroad on the issue of sedition case against a few students of Jawaharlal Nehru University. This little piece intends to contextualize the politics of JNU vis-à-vis Kashmir University

In the backdrop of the recent happenings in the intellectual hothouse of India— Jawaharlal Nehru University, it is quite important to understand that the JNU and Kashmir University’s politics works in a particular ontological context. The political activism in the JNU functions under the banner of progressive liberal leftism and its members understand the concessions and limitations provided by the constitution of Indian democracy.

Intrinsically, even the idea of dissent and disagreement, for which the JNU is known since its inception works well as an institutional offshoot for strengthening the roots of India’s claim to be a “progressive liberal democracy”. The oeuvre of post 9 February event in the JNU revealed two diverse approaches in the student activism of the university, which afterwards manifested the ingrained Indianizaton engraved in the (Freudian) subconscious of these “politically diverse” and “conscious representatives” of “dissent and disagreement” in one of the respected universities of India.

As per the reports, the first statement Kanhaiya Kumar (the JNUSU President) uttered within minutes after his arrest was “Kashmir is an integral part of India” and after release even appropriated “the Azadi slogan which was specifically raised in context of Kashmir”. Umar Khalid and his compatriots too will be released soon due to the pressure mounting from civil society and international media. Shehla Rashid, the much-talked Kashmiri activist is also working hard to be in the league of progressive leftism to create her future in Indian political mainstream. Nonetheless, the extreme leftists and so called secessionists from Umar Khalid to Arundhati Roy are true defenders/representatives of nationalism and Indian democracy; demanding India to behave like a true democracy for consolidating its progressive image among the leading contenders of a future super—power.

Not surprisingly, the rules and policies turn topsy-turvy when it comes to Kashmir. The activism in Kashmir University is an “a priori” conscious consequential struggle against an established occupation and occupational status quo. A recalcitrant resistance against a theoretically inclusive and practically exclusive power called the Indian state. The major difference between the political activism in India and Kashmir can be analyzed through the prism of state’s attitude toward the activists. In the JNU or in other parts of India activism is furthered by Supreme Court’s order to limit the police intervention up to verbal interrogation currently in the case of Kanhaiya and Umar Khalid. Activism in Kashmir may land you in jail with the occupational apparatus’ well-designed acts like Public Safety Act (PSA) thus labeling you into a potential threat to the state.

Kashmir is not Delhi where student activism is primarily seen as a critical loyalism to further the diversity of opinions in your country though within the ambit of parochial jingoistic nationalism of the Bhartiya Janta Party (BJP). The activism in Kashmir University starts from proctorial (university security wing) profiling that directly goes to police then a fabricated case and after a year or two you will have a student activist in Jail with the PSA trying to dismantle the potential threat to the occupation.

There is a remarkable story by Franz Kafka, which quintessentially contextualizes the behavior of Indian state with its “thinking subjects” in Kashmir as the story goes in Kafka’s Penal Colony, a crazed official who shows off a fantastically detailed torture machine whose purpose is to write all over the body of the victim, using a complex apparatus of needles to inscribe the captive’s body with minute letters that ultimately causes the prisoner to bleed to death. And there are innumerable official and unofficial deaths of people involved in resisting the Empire.

Political activism in Kashmir University is not a struggle for different means of sustenance but moral responsibility to represent the collective conscious narrative of Kashmir’s demand for dignified existence. Somebody asked a student activist in Kashmir University about his views on doing activism in the campus and his reply sums up what it really means to be a student activist in occupation: He said and I quote:

“Doing activism in Kashmir University is not a usual activism, it comes with a serious baggage because people in Kashmir are scared of being incarcerated, interrogated, hit, tortured, and killed after disappearance. People in Kashmir still try to live though knowing every single step they take has to be considered and well-thought, there are limitations everywhere, we cannot move as we want, say what we want, do what we want. Sometimes we can’t even think what we want to because the occupation has occupied our brains and hearts so terribly that it hurts and makes us want to shed endless tears of frustration and anger. Still in such depressing situations, there are people who try to keep this fire alive in their hearts and minds and continue to disseminate this message to the coming generation of Kashmiris.”

Political activism in Kashmir University comes with a baggage of serious consequences but the non-conformism of activists with pro-Indian agenda are unequivocally involved in representing the demand for Kashmir’s Right to Self Determination that makes the banned Students Union and its stand respected across the territorial boundaries because they are aware of the fact that truth does not belong to the order of power, but shares an original affinity with freedom.

Kashmir University Students Union and its politics demystifies the crafted questions and understand what Frantz Fanon refers in his magnum opus Wretched of the Earth— For a colonized people the most essential value, the most concrete, is first and foremost the land: the land which will bring them bread and, above all, dignity.