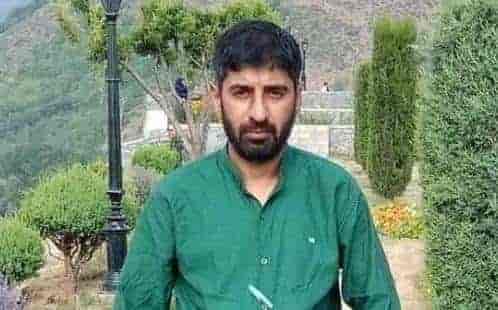 A policeman was killed after fired upon by suspected militants in Warpora area of Sopore in north Kashmir’s Baramulla district on Friday night.

Official sources that the gunmen barged inside the house of policeman (follower) Javid Ahmad Lone son of Abdul Khaliq Lone at around 10:45 pm and fired upon him at Warpora near Dangerpora in Sopore.
In the incident, Lone, suffered serious bullet wounds and was shifted to the nearby district hospital where he succumbed to injuries,” they said.

SP Sopore Javid Iqbal confirmed the incident and said that the investigations  in the case have been taken up.“Javid was fired upon by the militants at his home in Warpora and later succumbed. He was working as a follower in police department and was on leave,” SSP said.

Meanwhile, Army, Special Operation Group of Police and CRPF cordoned off the area and launched a hunt to nab the suspected militants. (CNS)