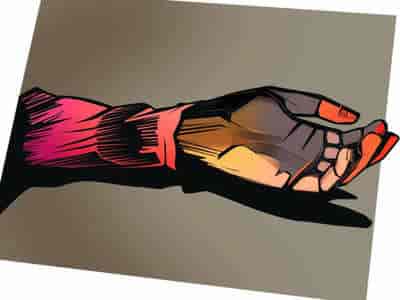 A policeman was arrested for murder of his wife in Poonch district of Jammu and Kashmir, officials said today. His mother was also held for being accomplice in the crime.

Shanaz Akhter, 36, a teacher by profession and a mother of three girls and a son, was strangled to death by the policeman along with his mother and the body was later placed at around 100 meters from the residence, news agency GNS reported, quoting officials.

Later the police recovered the body of the woman, with injury marks visible, at Keri Gulatta on 24 August, the officials said, adding that police filed a case (FIR No. 91) under section 302 and 109 of IPC at Police station Gurasi and started investigation.

“Based on the technical and other evidence, it has been found that the woman’s husband, Constable Mohammad Irfan Manhas, had reached home and in the midnight strangulated his wife while she was asleep,” GNS quoted SDPO Mendhar Z A Jaffri as saying.

Jaffri said while Irfan (posted with IRP battalion in Batamaloo Srinagar) manually strangulated the woman, his mother held the legs of Shanaz. After the murder, the mother-son duo tried to destroy evidence by changing the victim’s clothes before placing here body in the dead of night at some 100 meters from the residence, he said.

After the murder, Irfan, son of Mohammad Aslam (ex-serviceman), left for Srinagar in a truck in a bid to give impression that he remained on duty, the officer said.

It was an organised crime and the criminals have tried to hide /remove all evidences but due to sincere efforts of SHO Gursai Niaz Ahmed and the technical team of DySP Operations Poonch Manish Sharma and also the timely guidance and supervision of SSP Poonch and DIGP R/P range Vivek Gupta, the blind murder case was solved within a period of five days, SDPO Jaffri said, adding that the mother of the accused cop was also held.

Previous articleArmy says militant killed, infiltration bid foiled along LoC in Poonch
Next articleTeachers should be prioritised for Covid jabs: WHO, Unicef