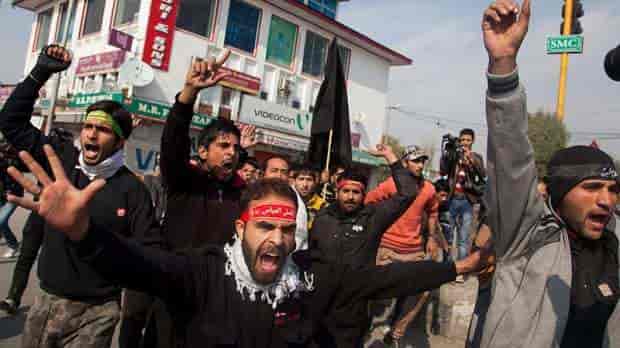 In the Indian-controlled Jammu and Kashmir’s summer capital, Srinagar, the police fired tear gas shells and used batons to disperse the Muharram processions, held to mark eighth day of Muharram, on Wednesday. Scores of Shia (a Muslim sect) mourners were injured in the police action and dozens of them were detained in different areas of the city after they clashed with police. Besides life remained stand still across the city after the authorities had put restrictions to foil the processions.

The month of Muharram of the Islamic calendar marks the martyrdom of Imam Hussein (AS), in the battle of Karbala, on the tenth day. Wednesday was the eighth day of Muharram, when Shia Muslims hold religious processions from the start of the month leading up to the tenth day, called Ashura. Muharram processions have been banned by the government in Kashmir since 1989.

The police in the city had put up barricades at different road junctions to stop the movement of people and transport. Additional deployment of the forces was called in for the vulnerable areas to maintain law and order.

“Authorities early today morning imposed curfew like restrictions in the city to thwart any attempt to take out the procession as there was an apprehension of law and order problem. Strict prohibitory orders under section 144 were imposed in several areas,” a local news-agency reported, quoting officials.

The mourners, however, defied the restrictions and took out processions from various areas of the city. Hundreds of mourners assembled at city-center locations. The police resorted to baton-charge, fired scores of teargas shells and used colour-water canons to disperse the crowd.

“It is unfortunate that the government doesn’t allow us to take out Muharram processions,” the new-agency quoted a mourner. He told the agency that the restrictions on Muharram procession have pierced the claims of government and exposed how a particular community is victimized and not allowed to perform its religious activities.