“Police did not help me even once”: Father of missing Shopian trooper seeks CBI probe 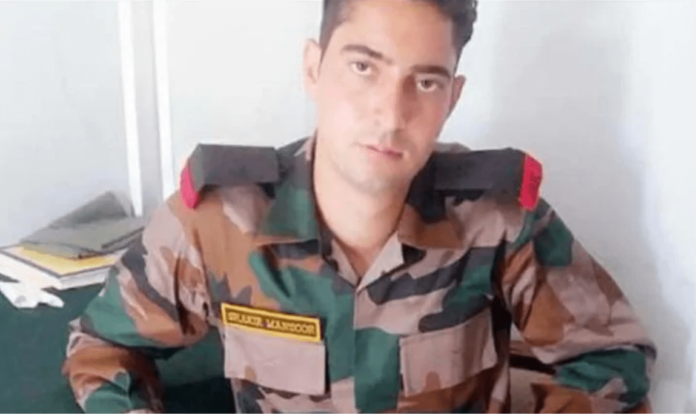 Srinagar: The family and relatives of an Army trooper who has been missing for over three months now staged a protest in Srinagar alleging authorities are showing no interest in locating the dead body of their beloved son.

Mystery still shrouds the disappearance of the army trooper, Shakir Manzoor, even as an undated unverified audio had surfaced on social media in which a person, suspected to be a militant, claimed to have killed the abducted soldier Mr. Shakir and not returned the body.

Rifleman Shakir Manzoor (24), a resident of Rishipora village of South Kashmir’s Shopian district, was allegedly abducted on 2 August this year after he left his home. His car was later found torched in the neighbouring Kulgam district. His family found his torn clothes with bloodstains at three places in an orchard near his home.

The protesting family members who assembled here in Press Enclave Srinagar told a local news gathering agency that since August they are trying hard to locate the body of Shakir Manzoor.  They were also carrying placards demanding justice for their son.
“From past three months we have been approaching everyone but nobody has helped us in retrieving the body. If he has been killed, then please help us to locate his body and if he is alive, then too please help us in locating him,” Manzoor Ahmad father of Mr. Shakir said as he broke down.

Mr. Ahmad while recalling the day his son was abducted said, “They (abductors) arrived in six to eight vehicles, everyone in the village saw them. For five to six days they would drag my son tied to a vehicle in the villages. Police did not come to help me not even once during those days, I took upon them myself while putting my village at risk. We wandered everywhere looking for my son, during those times I even found the dead body of a Sarpanch thinking of him as my son. I would like to reiterate that police did nothing,” he lamented.

“If a soldier is killed by the army of other nations even his body is returned, my son disappeared in the radius of  just a couple of villages, why can’t be his body found?”

Manzoor Ahmed said that nobody came forward to help the family. “We demand that this case should be handed over to Central Bureau of Investigation (CBI). Only CBI can unearth the truth,” he said. (with inputs from KNT)