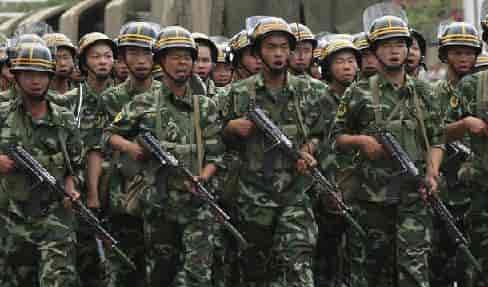 Chinese troops have begun stepping up activity opposite Arunachal Pradesh.

This comes as Chinese and Indian troops are eyeball-to-eyeball at seven places inside India’s claimed territory in Ladakh and Sikkim, Business Standard has reported.

Quoting unnamed officials from the Indian government, the report says that  People’s Liberation Army troops here are reinforcing their posts in large numbers, increasing their patrolling and stepping up violations of the Indian border – which in Arunachal Pradesh runs along the McMahon Line.

The two sectors that are seeing the most PLA activity are Tawang and Walong – which both bore the brunt of the Chinese offensive in 1962.

According to the newspaper report, in the Tawang area, PLA patrols have come right up to India’s Old Khinzemane post on two occasions, and accosted the Indian troops there. Khinzemane is right on the McMahon Line and was the point at which the Dalai Lama entered India after escaping from Lhasa in March 1959.

Khinzemane is located close to the Namka Chu river, where the Chinese launched the 1962 war with their first massed attacks on thinly-held Indian defences.

Also in the Tawang sector, the PLA has reinforced its base camp at Tsona Dzong, the main Tibetan border town located across the McMahon Line from Tawang.

In the Walong sector, which is at the easternmost tip of India, the newspaper quoting unnnamed officials  report aggressive activity from Chinese patrols at the Indian border post of Kibithoo. The PLA patrols, which have been coming right up to the border, are far more frequent and now include more than 40 soldiers in each – almost twice the number in normal times.

The PLA camp at Old Tatu, across the border from Kibithoo has also been heavily reinforced. There are also reports of heavy reinforcements being moved to Rima, the border town across the McMahon Line from Walong.

There is also aggressive Chinese activity in the Asaphila sector, which the Chinese attacked and captured in the 1962 war. Over preceding days, there have been multiple PLA incursions across the McMahon Line here, say sources. The Chinese have also established temporary camps, just across the border from the Kepang La and Sying La passes.

In the Upper Siang border district, where the Tsang Po river flows into India and becomes the Siang, and then the Brahmaputra, there have been a large number of border transgressions in recent days.

“India’s military intelligence is assessing whether the PLA is reinforcing the sector to guard against the eventuality of an Indian attack, or whether the Chinese have plans to occupy Indian territory here as it did in Ladakh,” the report says.