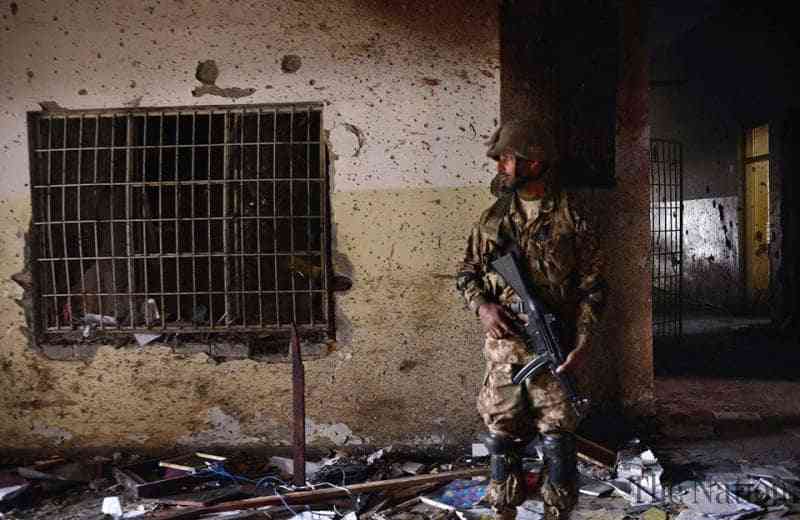 As the country reels from the massacre in Peshawar, MA Mistry assesses whether peace will ever prevail in Pakistan given the lack of unity between civilian and military leaders.

“Attacks on civilians are a sign of weakness, they are not sign of strength. Who but a coward kills people in a volleyball field? Children! For God’s sake, is that the depths in which we have fallen?”

The return of capital punishment to Pakistan is in a macabre way a fitting response to the worst terrorist attack the country has ever seen. Answering the bloodshed of innocents with the deaths of people who might also share the same description shows a short-sightedness that continues to characterise the country’s cack-handed reaction to the senseless slaughter of 152 people, many of them children, in Peshawar on December 16.

Descriptions of the bloodshed are superfluous when balanced against the loss felt by the families of the victims. The damage done by war’s destruction is always more keenly understood through reports of children’s suffering; they are without the means to defend themselves, let alone discern the reasons for fighting in the first place.

These schoolchildren had no expectation of the horror that would stalk their classrooms when they woke that morning. They would have laughed, joked and jostled on their way to school as if it were any other day. As Pankaj Mishra powerfully asserts: “The murder of children crushes our soul. It destroys the already frail hope, without which life becomes unbearable, that there is justice in our world.”

The travails of targeting the Tehreek-i-Taliban

“We selected the army’s school for the attack because the government is targeting our families and females,” said Taliban spokesman Muhammad Umar Khorasani. “We want them to feel the pain.”

With these weasel words the TTP justified the slaughter. Also known as the Pakistani Taleban, the TTP is a loose collection of militant groups based mainly in what used to be called North Western Frontier Province, now Khyber Pakhtunkhwa, bordering Afghanistan.

The operation referred to by the TTP spokesman is Zarb-e-Azb. Launched in June this year; its aim to destroy militant sanctuaries. However, it has been dogged by reports that those labelled as ‘good’ Taliban had been forewarned, and thus left the areas of North Waziristan deemed to be the military’s main areas of activity and relocated somewhere in the Federally Administered Tribal Areas. Perhaps to inoculate itself against the charge that it has not done enough to turn the tide against the Taliban, the Army released details of what it described as successful operations against militants in the immediate aftermath of the Peshawar atrocity.

Judicial moves – ending the moratorium on the death penalty and establishing military courts – strike a seemingly semantic tone. Phelim Kine, deputy Asia director at Human Rights Watch, said: “The government’s death penalty spree is a craven politicized reaction to the Peshawar killings that will do nothing to bring the attackers to justice.”

Meanwhile, Reprieve, led by British human rights lawyer Clive Stafford Smith, has released a joint report with Justice Project Pakistan, called ‘Terror on Death Row’, highlighting what it calls ‘the abuse and overuse of Pakistan’s anti-terrorism legislation’. It claims there are currently more than 17,000 pending ‘terrorism’ cases in Pakistan, many of which have nothing to do with terrorism.

The reality is that whatever the country’s civilian leadership hopes for peace with the newly installed administration of Afghanistan President Ashraf Ghani, Pakistan’s generals, not the government, guide Afghan policy, and they continue to hedge their bets by maintaining support for the Afghan Taliban, experts say.

Ayesha Siddiqa, journalist and author of the book ‘Military Inc: Inside Pakistan’s Military Economy’, wrote in The New York Times: “Although Prime Minister Nawaz Sharif and Gen. Raheel Sharif, the army chief, have promised to go after all types of terrorists, no such consensus actually exists within the government.”

The International Crisis Group, a think tank, reported in October this year that Sharif’s parliament lacks the resources and expertise to scrutinise what happens in the border areas, and therefore is forced to take whatever the Army chooses to tell it at face value.

Afghanistan has been traditionally been viewed as Pakistan’s back yard, with experts pointing to a decades-old view among the country’s generals of the need to maintain ‘strategic depth’ as a bulwark against its ultimate foe, India.

Aside from sponsoring militant groups in the decades-old conflict in Kashmir, still smouldering with violence as the former princely fiefdom awaits the outcome of the state assembly elections, Pakistan has also acted against Indian interests in Afghanistan.

India has donated billions in aid to Afghanistan, with whom it maintains significant military cooperation. Indian consulates in the country have been targeted by the Haqqani network – a lethally effective militant group closely aligned with the Pakistan’s infamous Inter-Services Intelligence directorate (ISI). The last attack occurred in Herat earlier this year, just days before Pakistani Prime Minister Nawaz Sharif was due in New Delhi – along with other South Asian Association for Regional Cooperation leaders – to celebrate the inauguration of Hindu nationalist Prime Minister Narendra Modi. The timing did not appear accidental.

South Asian specialist Stephen Tankel notes in his book, Storming the World Stage, The Story of Lashkar-e-Taiba, “According to US intelligence, the ISI used the Haqqani network to strike Indian targets in Afghanistan on other occasions. In addition to attacking Indian targets, Haqqani militants were also responsible for a host of assaults against high-profile coalition targets.”

Michael Semple – an expert on the region and former EU representative in Kabul before being expelled by Hamid Karzai – has previously warned that Afghanistan risks becoming the setting for a proxy war between India and Pakistan following eventual US withdrawal.

What hope for change?

While hopes remain that the scale of the atrocity will prompt a rethink among those in the security establishment who support the Taliban, the evidence to the contrary is clear. For example, no such change occurred event in the aftermath of the assassination of the country’s former Prime Minister Benazir Bhutto in 2007, who was killed by a lone attacker in the garrison town of Rawalpindi while campaigning in parliamentary and provincial elections.

Jamaat-ud-Dawa, a known front for Lashkar-e-Taiba (LeT), whose members carried out the 2008 Mumbai attacks in India, has received training and support from Pakistan’s security services. Mosques affiliated with the group blamed India for the Peshawar massacre in their Friday sermons following the attack.

Less often reported is the fact that the Taliban had, at least before the December 16 outrage, enjoyed popular support among Peshawar’s population. Anatol Lieven, former Times of London Pakistan correspondent and now a Professor in the War Studies department of King’s College, London, has written extensively about the reasons behind this phenomenon. Chief among them are religious conservatism and access to justice, Mr Lieven reports in his book, ‘Pakistan: A Hard Country’:

“After their association with what is seen as a legitimate jihad in Afghanistan, the other reason which every Taleban sympathiser I met gave for his support was the Taleban’s implementation of Shariah law. This is not the same as support for revolution and, what is more, the ‘law’ that the Taleban enforce is often not really the Shariah at all, but a sprinkling of the Shariah mixed with the pashtunwali and a rough form of communal justice. A great many people see this as preferable to the appallingly slow, opaque and corrupt Pakistani judicial system.”

The reality is that Pakistan is unlikely to change its approach amid NATO’s exit next door. Forfeiting influence in Afghanistan runs counter to the country’s strategic aims. And abandoning support for militant groups it has harboured for so long would be seen as self-defeating by the military, especially given its frosty relations with India over Kashmir.

While Pakistan’s Chief of the Army Staff, General Sharif, flew to Kabul in the immediate aftermath of the attack, there remains a question mark over what assistance he may receive. President Ghani has indicated that he intends to have better relations with his neighbour than the mistrust that characterised the end of Karzai’s rule, but Afghanistan’s security forces are struggling, and have this year suffered ‘unsustainable’ losses. The Afghan Taleban maintains a presence across swathes of Helmand province and attacks continue in Kabul. So while warm words are welcome, Mr Ghani may not be in a position to provide much practical support to his Pakistani counterpart in tackling terror. Perhaps more pertinently, it remains the case that each country accuses the other of harbouring wanted militants.

In Pakistan, public condemnation of this considerable crime is slowly being infected by poison peddlers hinting at the involvement of neighbouring country’s intelligence services. Prime Minister Nawaz Sharif has been weakened by the antics of Imran Khan and Dr Tahul Qadri earlier this year and is no position to dictate terms to an Army that drove him from power 15 years ago. But until the rift between senior civilian and military figures is reversed, efforts to rein in the Taliban will meet with mixed success at best, with peace a distant hope. Husain Haqqani, former Pakistan Ambassador to the US and now Director for South and Central Asia at the Hudson Institute, puts it succinctly:

“Pakistan needs to get out of denial that there are any jihadi groups that can be trusted or considered allies of the state. However useful they might have been for external purposes, non-state actors will always be a danger for the state internally.”

MA Mistry is a freelance journalist based in London.