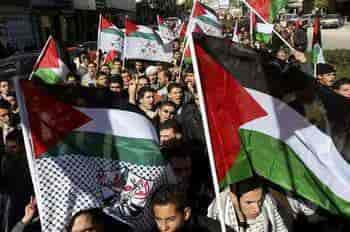 I do not know how much it is important to tell the story in details? The details are tragic. Yet the story of those Palestine families is not isolated from the whole story of Palestine, where unjust and sadness has become connected with its news.

The story is about the boat which took hundreds of Palestinians at the 13th of October escaping war in Syria to flee to safe areas. The boat was shot at by Libyan gun boats, and the boat drowned , and about 300 lost their lives.

The captain sent a message for help to Italy. Italy said the boat is in Malta water territory, and the Malta navy came late when hundreds of families are drowned.

The whole story is about tragedy and survival. Those Palestinians, to remind those insist to be deaf, are from Palestine, not from Syria. They were uprooted by Zionist Jews from their country.

So, the story is not only about the civil war in Syria, but rather about the original sin of the western power: The state of Israel.

Yes Israel is the original sin, and it is the source of all problems the region is subjected to. And every reader knows how big would be the news have those drowned been Jews!

Zionist Jews brought to the region the mass destruction weapons and the culture of aggression and wars. And this led to the militarization of the region, and consequently, hindered the region to develop in a peaceful way.

Is the west ignorant about this fact? I doubt very much they are? But I doubt they have the will to do anything!

Never the less, if time is not mature for a serious review for the EU and the Us towards a different approach for a just peace? The question is when the time will come?

The question also is, when the West will wake up, free itself from the Zionist propaganda and pressures? And the fact that must be said over and over, as long as the western powers , are not willing to stop supporting, and appeasing Israel, the region will move from war to war, and the Palestinian tragedy will never end.

Dr. Salim Nazzal, a Palestinian-Norwegian historian on the Middle East. He has written extensively on social and political issues in the region.