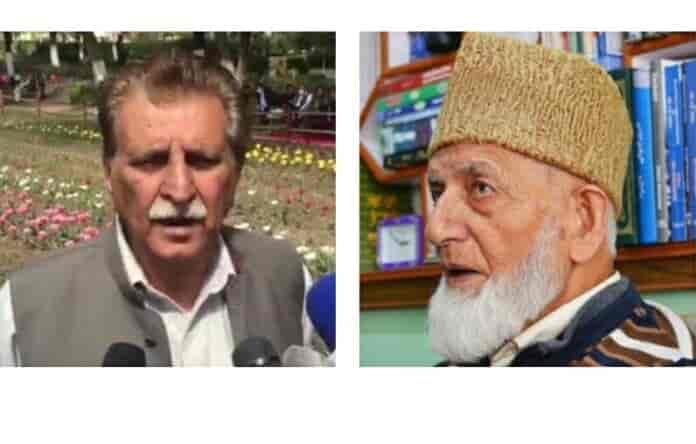 The Pakistani parliament’s Kashmir Committee is “a group of powerless, useless, and illiterates,” said Haider, while talking to reporters, a clip of which was shared on Twitter by Pakistan-based journalists.

Prime Minister of Azad Jammu & Kashmir ⁦@farooq_pm⁩ condemned Kashmir Committee of Pakistani parliament on their statement against Syed Ali Gilani he said “shame on them” pic.twitter.com/irOYzpvOpa

Haider questioned the committee for accusing Geelani of “serving the cause of Hindutva regime.” “What right do they have [to cast doubts on Geelani]. Geelani is an independent citizen and not bound by them. The [committee] should introspect on the value and stature of the statement [Geelani] has given,” he said.

Haider is the prime minister of the Pakistan administered Kashmir, which New Delhi refers to as “occupied by Pakistan” and Islamabad refers to “Azad Kashmir”.

“Did they want to please [Srinagar–based unionist leaders] Omar Abdullah and Farooq Abdullah. The Kashmir Committee should be ashamed of itself. We condemn [their statement in response to Geelani’s statement],” he said.

The committee, the official organ of the Pakistani government tasked with mobilizing international support for Kashmir, is headed by Shehryar Afridi, a member of Pakistani prime minister Imran Khan’s Pakistan Tehreek-e-Insaaf.

The committee came under fire from prominent citizens of Pakistan and PaK after The Kashmir Walla reported that it had rubbished Geelani for questioning the reiteration of ceasefire between Indian and Pakistani armies.

The committee had said in a response on Twitter: “Anyone dubbing it a sellout would only serve the cause of Hindutva regime.”

Muhammad Ibrahim Qazi, the grandson of former chief of the Pakistan chapter of Jamaat-e-Islami, also backed Geelani and said that the “pro-India elite” elements in the Pakistani government are “enslaved by British and Hindu imperialism. All of them are cowards.”