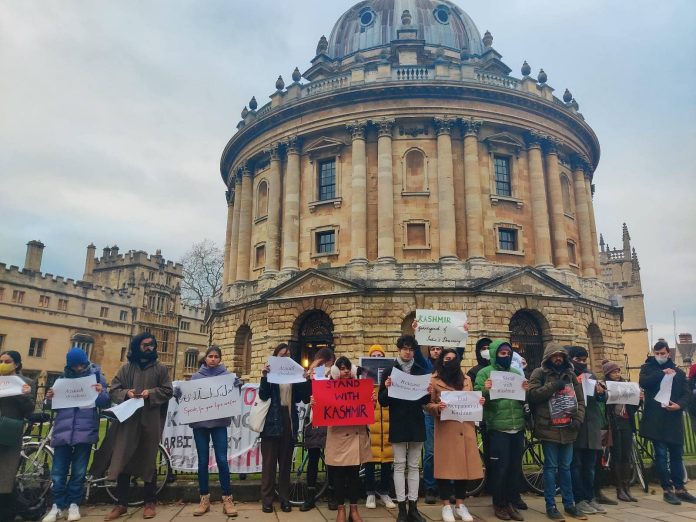 Sttudents at the University of Oxford protested against atrocities in Kashmir and demanding the release of prominent human rights activist Khurram Parvez, The Quint reported.

In a press release issued by the protesting students, they stated that they “urge the international community to pressure the Indian state to stop the atrocities in Kashmir and also release Khurram Parvez, a prominent human rights defender.”

It went on to note that the protests come a week after the Indian armed forces “killed at least six people in two different gunfights while using some of them as human shields.”

As per the Twitter account of Kashmir Zone Police, three ‘terrorists’ had been neutralised in Rambagh while their identification and affiliation were yet to be ascertained, it said.

“Contrary to the police’s version, eyewitnesses recount that all of them were unarmed and were thrown out of a car and shot in broad daylight”, said the protesters.

The students also spoke on the Hyderpora incident, in which the police said they had killed an individual associated with a militant and two others, while their anguished families asserted otherwise.

Holding placards and sloganeering on Sunday, the students said, “Recognise, respect, and restore the dignity of Kashmiri lives. Stop the arbitrary killings and bloodshed of the Kashmiri people. Release political prisoners and human rights defenders, including Khurram Parvez.”

They also beseeched the Indian government to “respect the right to self-determination of Kashmiri people and enable them to exercise it.”

This was followed by the gathering observing a 7-minute silence.