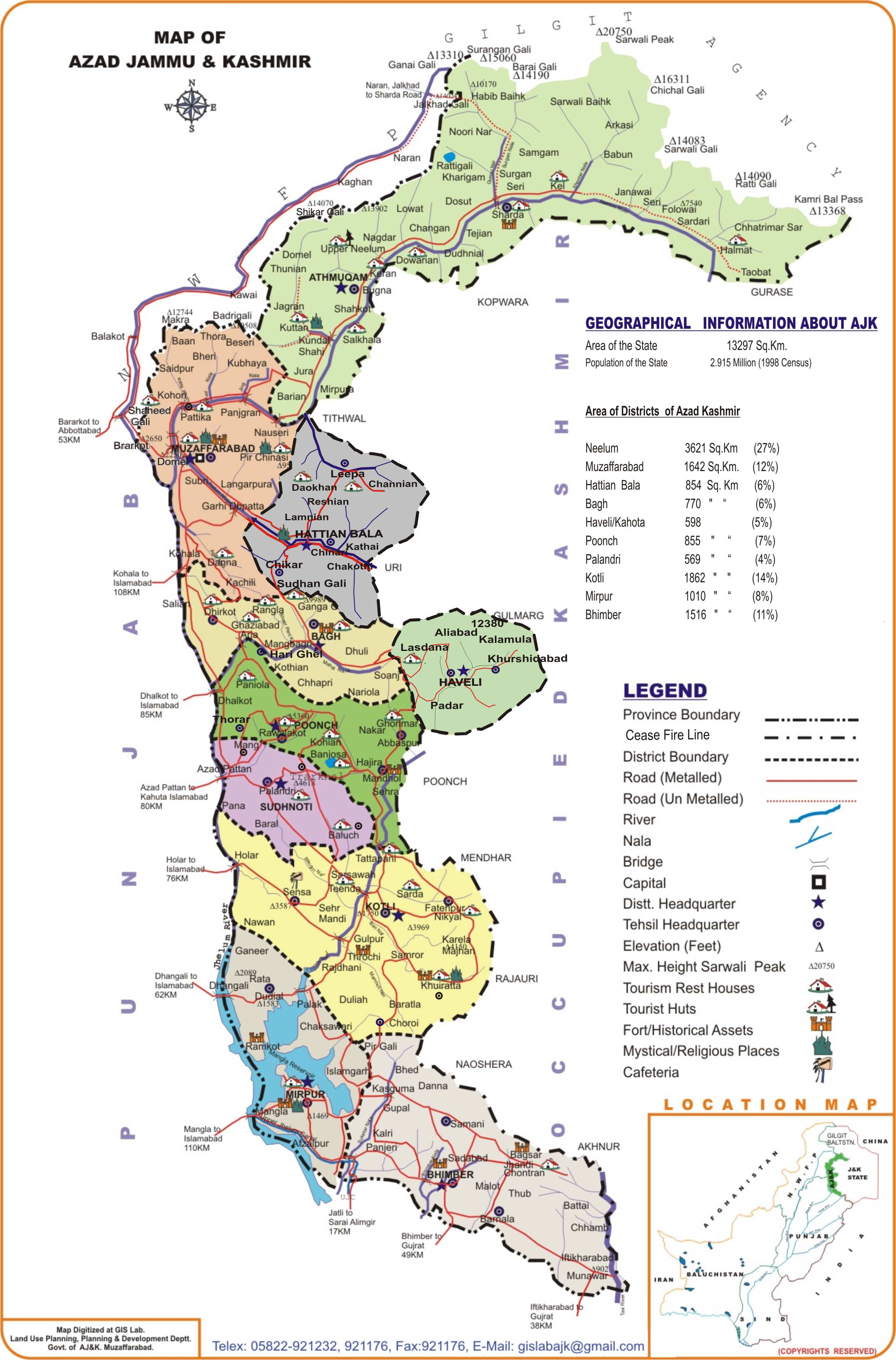 The Election Commission of Pakistan-administered Kashmir has announced the election schedule for Azad Jammu and Kashmir’s 2016 general elections of the legislative assembly as on 21 July 2016. According to the Chief Election Commissioner, Justice Ghulam Mustafa Mughal, the constitutional tenure of the AJK legislative assembly will expire on 24 July 2016. Under the Act-74, it is mandatory to hold elections 60 days before the last date. There are 22,37,058 voters, including 12,11,842 men and 10,25,216 women in AJK’s ten districts. For refugees, in 12 constituencies, a total of 4,44,634 voters will be entitled to exercise their right to vote, he added.

The election commissioner also announced that the elections will be held under the security of the army and rangers and a code of conduct for political parties and candidates also has been issued. The AJK elections will be held under judiciary while in 12 constituencies of refugees in Pakistan, these would be held under the supervision of the Election Commission of Pakistan. Now, AJK is all set for elections next month to vote 41 lawmakers into the assembly. The house has five reserved seats for women, plus one each for a religious scholar, professional (commonly known as a technocrat) and for Kashmiris settled abroad. The 49-member house has a power to elect its Prime Minister and President. Twelve members will be elected from the refugees’ constituencies from Indian-administered Jammu and Kashmir settled in different parts of Pakistan. After the announcement date of the general election all political parties and candidates are running election campaign and engaged in making new electoral alliances for their success in the election.

Currently, 29 seats in the Assembly are occupied by AJKPP and 11 seats by PML-N. The Muslim Conference has five seats, MQM two; Jamiat-e-Ulema Pakistan one seat, PTI, one seat and the rest are independents in the 49-member AJK Assembly. For the elections, thousands more migrants from Indian-administered Kashmir are registered as voters. Five migrants including former Hizbul Mujahideen Commander Shabir Ahmad Tantray (Yassin Charli) and Naseema Wani are also contesting in the elections.

If we analyse the current political scenario than it seems that the upcoming elections would be an interesting contest between Pakistan People’s Party (PPP), Pakistan Muslim League (Nawaz) – PML (N) and the coalition of Muslim Conference and Pakistan Tehreek-e-Insaaf (PTI). The PPP has decided to contest election without any alliance while the Pakistan Muslim League (PMLN) would fight for success with the coalition of Jamaat-e-Islami AJK and Jammu and Kashmir Peoples Party (JKPP) led by Sardar Khalid Ibrahim. The Jamat-e-Islami, Mutahida Qaumi Movement (MQM), Jammu and Kashmir Liberation League (JKLL) and Jamiat Ulema Islam (JUI) have also decided to participate in the election. On the other side some of the nationalist parties are also planning to take part in the general election, while some are going to boycott the elections as usual.

The people of AJK habitually always vote for the pro-Islamabad political parties. They always think that the confrontation with the federal (Pakistan) government undermines AJK’s regional interests and slows down its development and economic benefits. In this context, people usually vote for the ruling party in Pakistan. The Pakistan Muslim League is the only ruling party in Pakistan and Muslim League AJK chapter is emerging political power of AJK led by Raja Farooq Haider. The PML (N) is trying to make its way up so people of AJK are rapidly joining the PMLN-AJK and making it stronger and stronger day by day. The PML-N AJK leadership believes that they would win the elections in AJK with a vast majority.

The PML (N) has its eyes on the nine refugees’ seats in Punjab, a state where it is in power and where it enjoys mass support. It also has a solid vote bank in all ten districts. The coalition with Jamat-e-Islami and JKPP also put PMLN on the strong and victory point. If Prime Minister Nawaz Sharif takes some interest in the local affairs of AJK and leads the election campaign his party’s standing could be greatly strengthened. So far, Sharif has left AJK’s affairs largely to the lower level leadership that may not be able to counter the PPP’s political offensive backed by the federal government.

The head of PMLN, Sharif, has also reiterated his affection for Kashmir and said struggle for self-determination launched by its people would never go in vain. During his visit to AJK, Sharif expressed the hope that his party would get mandate of AJK people the same way as it got from the people of Pakistan and Gilgit-Baltistan. Sharif also promised of re-organisation and up-gradation of the constitutional and administrative institutions and facilities in education, health and communication sectors on modern lines. The PML-N is also not taking the elections lightly as several of its sitting ministers in the federal government have visited the area and held public gatherings in recent days.

The Pakistan Peoples Party, the ruling party of AJK, which won the general election in 2011, and formed the government and successfully completed its five years, is also trying its best to win the elections again. It has kick started the election campaign with the help of its chairman of Bilawal Bhutto Zardari, son of Late Benazir Bhutto. For gaining peoples support and capturing the hearts Bhutto has visited four main districts of AJK and asked people for their vote. He has also announced that he would himself campaign during the election and also pledged to resolve all their issues, if once again his party is elected to form the government. It seems the PPP has already constructed a comprehensive election strategy to ensure its victory. The ruling PPP is making tall claims of taking another stint on the basis of its current AJK government’s performance. The Prime Minister Chaudhry Abdul Majid also seems quite confident to win the majority seats. On the other handTop of Form, the opposition has also claimed that many leaders and workers of PPP were unhappy with their leadership and in the future the general elections in AJK, many party workers and leaders would join the other parties.

The third political force which is going to contest general election is the coalition of state based political party Muslim Conference (MC) and Pakistan Tehreek-e-Insaf (PTI). The AJK chapter of Pakistan Tehreek-e-Insaf (PTI) is an emerging force challenging status quo party in AJK with joining of former AJK Prime Minister Barrister Sultan Mehmood. Now PTI leaders are making efforts to introduce the party at a grass-root level for the elections. In the 49-member incumbent AJK Assembly, the PTI only has one seat, held by Barrister Sultan Mehmood. The PTI chairman and other senior party leaders have also held many public gatherings in AJK but the party’s central leaders have hinted that Imran Khan would address public gatherings in AJK in the elections. It has been already active in the arena to drive maximum leverage as its AJK President Barrister Sultan Mehmood propagates that PTI will form the next AJK government.

Interestingly, the PTI’s coalition partner Muslim Conference (MC) that is one of the oldest local political parties of AJK is fast losing its ground to the mainstream parties PML (N) and PPP. A large number of Muslim Conference stalwarts have left the party. Conventionally, the Pakistan Muslim League or the establishment has been a major source of support for the MC but that does not seem to be the case in this election. It encouraged factional rift within the Muslim Conference, which caused a vertical split in the party. As a result of this split the former AJK Prime Minister Raja Farooq Haider established a PML (N) chapter in AJK. This move divided the vote bank and severely weakened the Muslim Conference. So there is limited chance for the MC and PTI to win this election and form a government but it would be a big threat for other political forces especially PMLN and PPP. The on ground competitive edge of the Muslim Conference, being a state political party, at present seems short of tough electoral combat. The Muslim Conference, led by Sardar Atteque Ahamad Khan, could have alone bagged a strength that would push it to power podium. The Muthida Quami Movement (MQM) also managed to get two nominees elected in the last elections, which invited huge criticism about coercive measure used by MQM to get favorable results.

None of the state political parties have announced their election manifesto so far. However, the EC issued a 35-point code of conduct for the intending candidates for the upcoming general elections. According to the code of conduct, the display of weapons, firecrackers and jubilation firing in the air during the election rallies have been completely banned. Nobody would be allowed to run a media campaign in favor or against any candidate on both print and electronic media from the government funds. Political parties have to discourage government employees from taking part in electioneering. All the candidates have been directed not to issue any statement against Pakistan’s ideology, armed forces and judiciary. All political parties should evolve a code of conduct to ensure peace during elections in AJK. Now the people of AJK are impatiently waiting for 21 July 2016 to cast their votes in favour of favorite candidates.