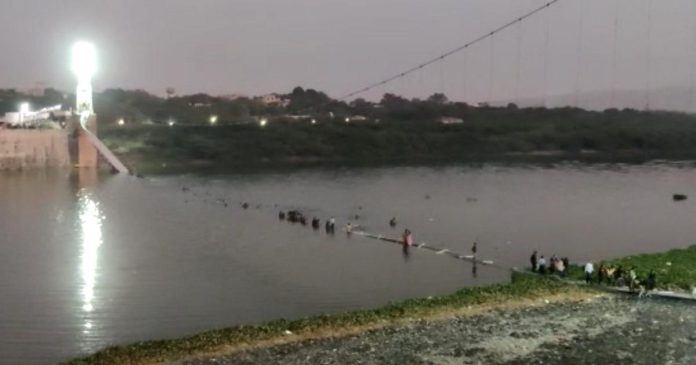 A nearly century-old suspension bridge on Machchhu river in Gujarat’s Morbi city collapsed on Sunday evening due to which several people standing on it fell into the river, officials said.

Over 60 people have died, as per reports emerging out of Gujarat. Over 100 are reportedly missing. There could be more casualties. Over 70 have been rescued so far.

The bridge, which was reopened just a few days back on October 26 on the occasion of Gujarati New Year for the public after renovation, collapsed as it could not bear the weight of the people standing on it, they said.

“Due to the bridge collapse, several people fell into the river. A rescue operation is underway. There are reports that several people have suffered injuries, too. They are being rushed to hospitals,” local MLA and state minister Brijesh Merja said.

More than 500 people, including children, had come to see the hanging bridge when the accident occurred, Morbi city Congress chief Rajeshbhai Kavar said, as it was the weekend.

“There were at least 100 people on the bridge when it collapsed. Around 40 people were rescued and 60 were still missing. Some five to ten were hanging on the bridge and are being rescued,” said Gujarat DGP Ashish Bhatia.

Rescue work is hampered by the fact that it is nighttime, said officials.

Gujarat Home Minister Harsh Sanghavi left for Morbi as news about the accident came in.

Prime Minister Narendra Modi has learned about the incident and has instructed the state machinery to rush to Morbi administration and speed up rescue and emergency medical services.

Rs 2 lakh has been announced from the Prime Minister’s National Relief Fund (PMNRF) for the family of each person who lost his or her life in the mishap. Rs 50,000 will be given to each injured person.

The state government will be providing compensation of Rs 4 lakh to the family of each deceased and Rs 50,000 to each injured.

Fire teams from surrounding districts, too, have been rushed to Morbi to speed up rescue work.

Three teams of the National Disaster Response Force (NDRF) are currently on the spot. (PTI)