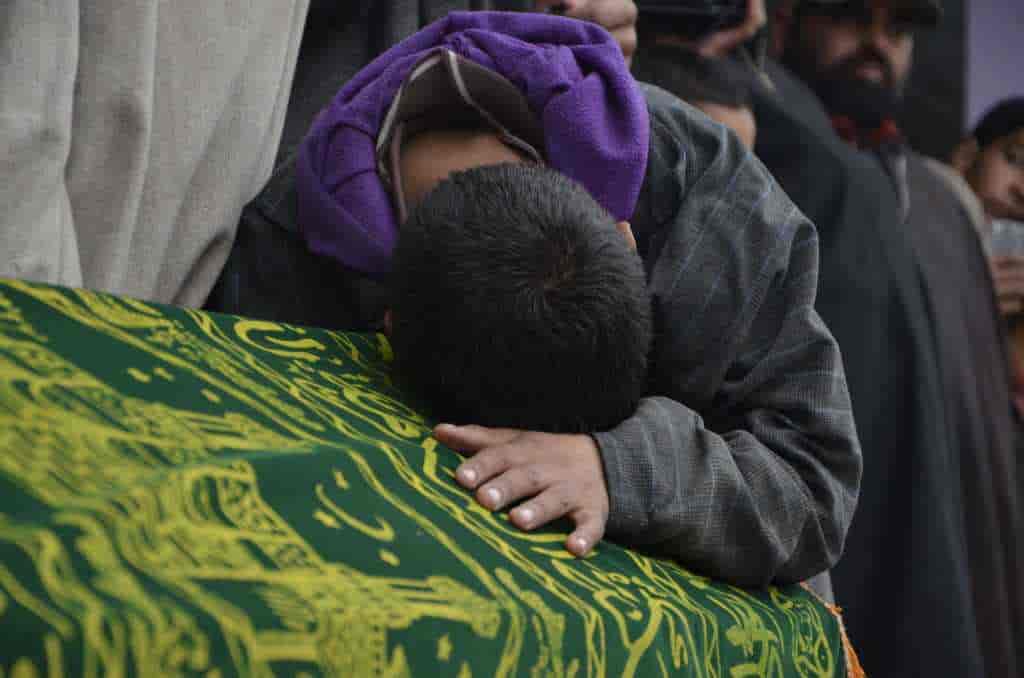 When India’s next possible Prime Minister Mr. Narendra Modi was taking ‘holi’ dip in Varanasi, the Indian state had already silenced one more youth in Kashmir. Forever. On the eve of holi — the festival of colours — the blood of one more youth was spilled on a street of Naidkhai, Bandipore, in North Kashmir. Farhat too fell to the music of bullets. And his body lowered into the grave. Farewell; goodbye!

The authorities in the disputed Himalayan region have again assured a ‘fair’ probe and said that action would be taken against the guilty security men involved in the gruesome murder. But isn’t Kashmir awaiting justice in criminal cases like that of Kunanposhpora mass rape (February 1993), extra-judicial killings of Pathribal (March 2000), and numerous other crimes since 1989, and even in cases before the eruption of a popular anti-India uprising.
“The Divisional Commissioner Kashmir Mr. Shailendra Kumar has assured a strict action against the perpetrators in the latest case, but in his press conference he also talked about different versions and circumstances that preceded Farhat’s murder. “The probe has been ordered into the killing of Farhat Ahmad Dar. We were told that the youth was killed after he attacked a mobile van of police but there is also another version that Farhat’s was a cold blooded murder,” Mr. Kumar had said in his press conference in the summer capital Srinagar.
Probe into the killing of Farhat is one more addition to the dingy wardrobe of probes in Kashmir.

Meanwhile, Mr. Arnab Goswami must be busy on weekend holidays and therefore would have no time or conscience left to ask his nation any questions on Farhat’s cold blooded murder. Instead his retired army generals — the permanent guests on his noisy comedy show Nuisance Hour— would perhaps be fatigued in framing crafty arguments to defend the draconian Armed Forces [Special] Powers Act, AFSPA.

And Kashmir’s own Twitter trendy Chief Minister, Mr. Omar Abdullah would be full of online activity in articulating his tweets how to distinguish between the ‘democratic’ and draconian parts of an inhuman law like the AFSPA. Come elections and Mr. Omar would change his tone and tenor to try and sound like ailing resistance leader Syed Ali Shah Geelani and then demand justice for Kashmir and the Kashmiris.

Farhat is not just one more addition to the statistics and death toll. For most Kashmiris he remains a martyr whose martyrdom reminds them about the brutal oppression they are resisting against in every small or big way.

Rumour is defined as unverified information. The biggest rumour of our times for most Kashmiris is that India is the world’s largest democracy. There is no limit to falsehood and propaganda in a ‘democracy’ where in youth are executed to ‘satisfy collective conscience of a nation’ and teenagers like Farhat Dar and Tufail Mattoo fired upon for sport.

In civilized societies the perpetrators of heinous crimes are identified and punished with an aim to deliver justice and to ensure peace. In a police state like Kashmir, the perpetrators are protected and in some cases rewarded too to boost their morale by the world’s largest democracy. In Kashmir, the Indian state and its security apparatus ensure peace at gun point and through restrictions and curfews, because there is absence of sincerity to deliver justice.

But the reality is that the economic doles, scholarships and media propaganda cannot be alternative to political resolution and deep rooted aspirations. The Kashmiris can’t afford to forget Farhats and Tufails. Neither will they forgive the perpetrators. Justice has to flow like a mighty stream.

Previous articleKashmir Killing: “Where would I find you now my brother?”
Next articleSalman Khurshid: Rip the flag to see dissent