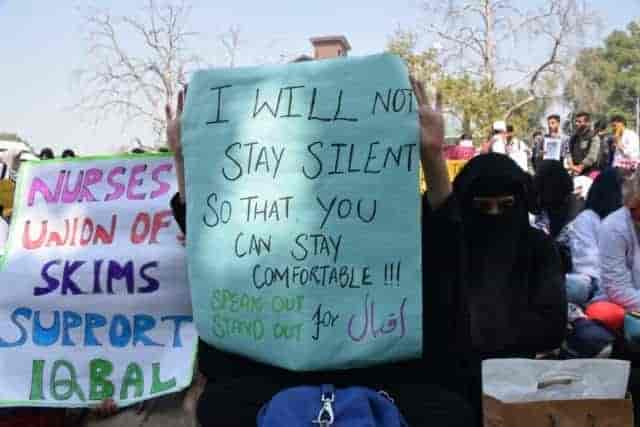 Nursing students Tuesday staged a protest demanding the release of their colleague Muhammad Iqbal who was arrested by police in connection with Jajhar Kotli incident.

‘The conductor detained by police with regard to Jhajjar Kotli incident is a Nursing Student at SKIMS Soura,” claimed his colleagues who staged a protest here in Press Enclave Srinagar on Tuesday. These students have been continuously protesting since Sep 12, the day when Iqbal was detained by police and shifted to some unknown destination.

Pertinently, on September 12 (Wednesday) police claimed that during checking by flying squad at Domail, Police Party signaled a truck (No.JK03-1476) which was on its way from Jammu to Srinagar to stop. In the Meantime, three militants who were boarding the truck opened fire, resulting in injuries to one person while they themselves managed to escape in the forest area of Jhajjar Kotli.

The police claimed that truck driver and conductor were arrested, however, Nursing Students from SKIMS claim that Muhammad Iqbal Rather whom police described as a Conductor is actually a final year Nursing student who had gone to Jammu to consult a doctor for his ailing father.

A large number of male and female Nursing students staged protest in Pratap Park Srinagar demanding the immediate release of Muhammad Iqbal Rather son of Abdul Khaliq, a resident of Futlipora Budgam.

“Iqbal is our colleague and we know him well. He is not a conductor but on the day of incident, when gunshots reverberated in atmosphere, he panicked and tried to escape from the spot. He was arrested and labeled as sympathizer of militants,” the protesters told CNS.

“We want to know his whereabouts. Iqbal is innocent and he has nothing to do with Jhajjar Kotli incident,” the protesting students said adding that he is the only brother among four sisters. (CNS)