Night temperature rises as Kashmir braces up for snowfall 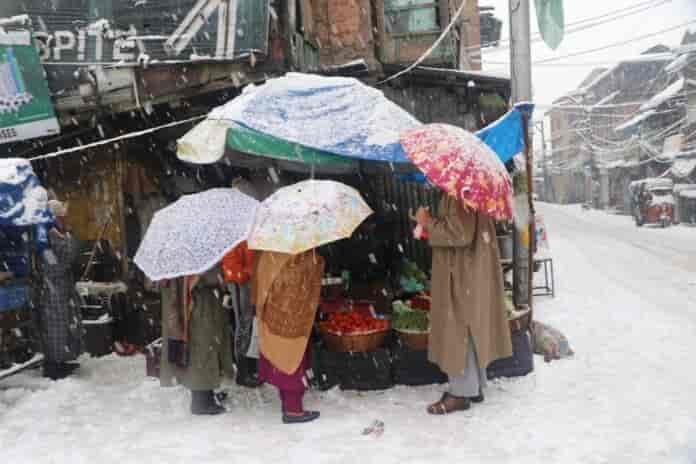 With overnight cloud cover amid forecast for light rain and snowfall till 19 January, night temperature further increased in Jammu and Kashmir on Monday.

A meteorological department official told GNS that Srinagar recorded a low of 1.0°C against last night’s minus 1.2°C in the summer capital of the J-K.

Kashmir is presently under the grip of 40-day long harshest period of winter, known locally as ‘Chillai Kalan, which started from 21 December. It is followed by a 20-day long ‘Chillai Khurd’ and a 10-day-long ‘Chilla Bachha’.

Qazigund, the gateway town of Kashmir, recorded a low of minus 1.0°C against minus 3.4°C on the previous night, he said.

Kokernag, also in south Kashmir, recorded a low of minus 2.0°C against minus 4.5°C on the previous night, the official said.

Kupwara town in north Kashmir recorded a minimum of 0.5°C against minus 2.1°C on the previous night, the official said.

Jammu recorded a low of 9.0°C against previous night’s 8.4°C which is 1.9°C above normal for the J-K’s winter capital during this time of the year, he said.

Weatherman has said that there was no forecast of any major rain or snow till the end of January in J-K.

“Under the influence of feeble Western Disturbance, weather most likely to remain generally cloudy with possibility of very light to light rain/snow in plains of J-K during 16-19th and light to moderate snowfall over higher reaches,” the MeT official said . “As of today, there’s no forecast of any major rain/snow till ending January (accuracy 60-70%) .” (GNS)