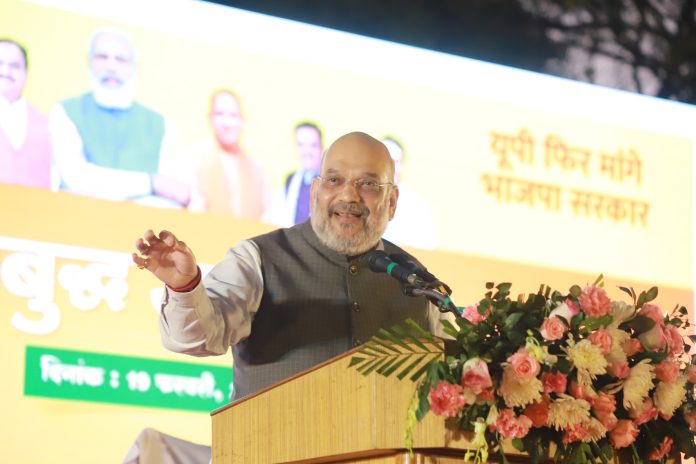 Speaking at an event to flag off the Bharatiya Janata Party’s ‘Gaurav Yatra’ in poll-bound Gujarat, Amit Shah also said the Congress used to taunt his party over the construction of the Ram Temple in Ayodhya but work on it was now in progress.

Incidentally, PM Modi had also blamed Jawaharlal Nehru for the issues plaguing Kashmir while addressing a gathering in Gujarat earlier this week.

Speaking on the Ram Temple in Uttar Pradesh’s Ayodhya, Amit Shah said the Congress used to mock the BJP with slogans like “mandir wahi banayenge but tithi nahi batayenge” (the temple will be built but they won’t say when).

“But the dates were declared, the ground breaking ceremony was completed and a grand temple is coming up at the promised place,” Amit Shah pointed out.

Hitting out further at the Congress, the senior BJP leader said curfews were a routine occurrence when the former ruled Gujarat, but the advent of the Modi government in the state has ensured “those days are gone now”.

“Out of 365 days, curfew would be in force in 200 days in parts of Gujarat when the Congress was ruling the state. They (Congress) thought they would benefit if people fought each other. Those day are gone now,” he said.

“After Narendra Modi came to power in Gujarat, curfew has not been imposed in the state for the last 20 years,” he claimed.

Amit Shah, later in the day, will flag off two ‘gaurav yatras’ of the party from Unai in Navsari district. On Wednesday, BJP national president JP Nadda had flagged off two such yatras.

The yatra that started from Zanzarka in Ahmedabad district on Thursday morning will conclude at Somnath Temple town, while the ones from Unai will go to Ambaji Temple, covering the tribal belt of the state, and Fagvel Temple town in Kheda district, respectively. (PTI)

Previous articleFake astronaut duped woman of 24 lakh to ‘return to earth’, marry her
Next articleSIA files chargesheet against ex-CRPF personnel in espionage case