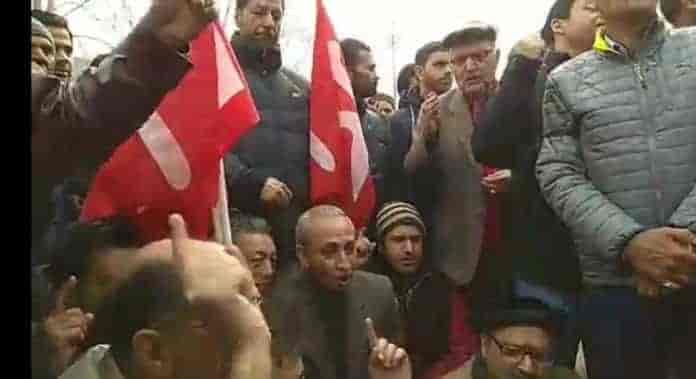 The Jammu and Kashmir National Conference (NC)  staged a protest on Monday in Srinagar against Governor Satya Pal Malik’s decision to treat Jammu and Kashmir bank as public sector unit and over the continuos killings of civilians in the state.

Senior party leaders and party workers raised slogans against the governor’s decision and demanded he take his decision back, “Governor is attacking on Jammu and Kashmir’s special status. Rather than introspecting the public issues, he is adding more troubles for the people of J&K.” they said.

The protesters said that such unacceptable decisions can trigger negative consequences in the state.

“The administration should avoid any decisions which are against the interests of people. They should look for the problems of the people. Avoid making the new law’s when there is no government in the state. Valley is going through its worst phase in terms of facilities and administration,” party workers added.

The party workers raised slogans against the BJP and government forces for the continuous killing of civilians in the state.

“Our young children are being killed. Young boys, doctors, engineers, phD scholars are picking arms and get killed. This is a very serious issue.” He said.