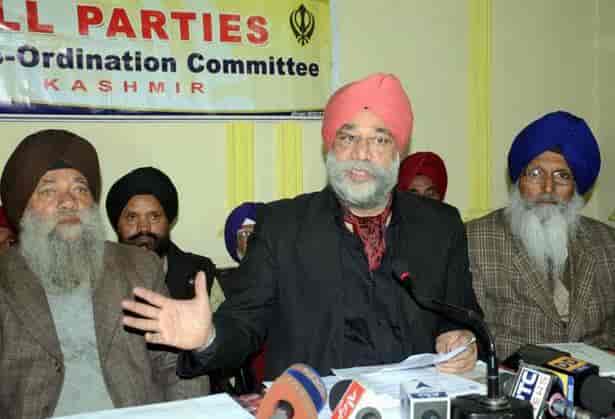 President of All Party Sikh Coordination Committee (APSCC) Jagmohan Singh Raina on Monday cautioned the people of the “Miscreants” who are disturbing the communal harmony over the forced “inter faith Marriage” of a Sikh girl.

Sikh leader Jagmohan Raina while talking to CNS said, “The incident of the forced marriage of a Sikh girl with a Muslim boy was pre-planned and backed by the some powerful people, who even didn’t allow her parents to go inside the court, where the girl was manipulated and forced to sign marriage papers”.

He confirmed that only after the protests on Sunday, the administration handed over the girl to her family.

Raina added that some people are disturbing the communal harmony and claimed that they are provoking people to foment trouble and blaze the peaceful environment of the valley to leave a wrong impression about Kashmir throughout the world.

Raina while cautioning the people of such elements said, “Since ages we are living together with brotherhood and this age-old bond cannot be broken with such conspiracies”.

At the same time he requested people to maintain communal harmony as isolated incident should not bring two communities at loggerheads with each other.

Meanwhile he questioned the silence of the Kashmiri leaders and said that their silence is unfortunate as it leaves a wrong impression on people. (CNS)