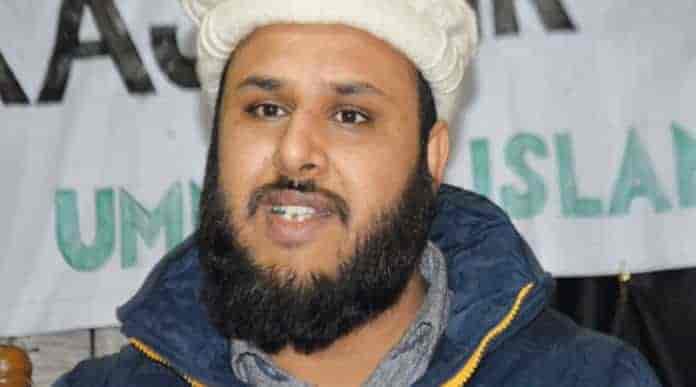 The Chairman of Ummat-e-Islami Jammu Kashmir (UeI) Mirwaiz Qazi Ahmed Yasir of South Kashmir on Thursday expressed grief over the harassment by the government forces with the families of militants in the South Kashmir.

Mirwaiz Qazi Yasir said that the families of the militants should not be targeted for their beliefs and religious backgrounds. “It is regretting to see how militant families are being harassed for the past few weeks, this is nothing, but inhumane,” said Mirwaiz Yasir.

Addressing a meeting of UeI at the party headquarters, he added that the insanity and harassment which the forces are doing against the families of Riyaz Naikoo, Naveed Babu of Pulwama, Shah Jahan of Shopian, Azad Malik of Arwani, Lateef Dar of Pulwama is a sign of anger and frustration and these things will not cultivate anything with them.

Mirwaiz Qazi Yasir said that the forces are trying to give possible reasons to the common people to hate them more and more. “This behavior is not humane, why are the houses of militants being torched?” Mirwaiz Yasir asked.

He said that this behavior of the government forces is actually “giving rise to the hate against the oppressor and trigger more and more youth towards the militancy in the Kashmir Valley.”

“Everyone, all Kashmiris express empathy and stand with the families of Militants who are being targeted for no reason,” said Mirwaiz Yasir.

Mirwaiz Yasir also paid tributes to Altaf Ahmed Dar alias Kachroo of Hawura Kulgam and said that he has rendered great service to the Kashmir cause and the people of the south Kashmir region will remember his services to the freedom struggle. He also paid rich tributes to the Slain Militant Umar Rashid Wani.

Qazi further demanded the release of many pro-freedom leaders including Sarjan Barkati and others who are in jails from last many years.

Previous articleBJP J-K President says, “New Governor is our man”
Next articleShutdown over abrogation of Article 35A halts life in J-K