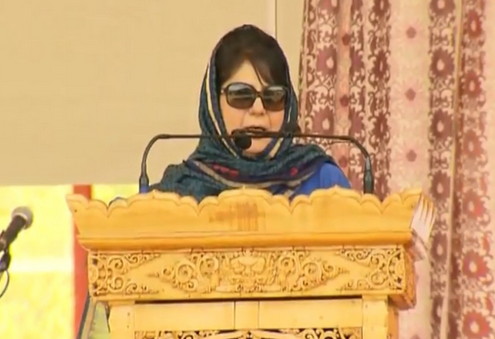 Chief Minister Mehbooba Mufti today hoped that Prime Minister, Narendra Modi would continue his efforts to find a lasting solution to the pain and wounds of the people of Jammu and Kashmir.

Addressing a gathering on the occasion of the inauguration of 330 MWs Kishenganga Hydro Electric Project and foundation laying of Srinagar Semi Ring Road project here today, the Chief Minister thanked the Prime Minister for announcing unilateral halt on security operations in the State.

“It certainly is a big step which needed courage and you have amply displayed that. Not only the political parties, every person in the State is grateful to you for putting the balms on their wounds”, she addressed the Prime Minister adding that the people of the State are ready to walk ten steps in response to this on the road to peace and getting them out of quagmire of violence.

Mehbooba Mufi said that the step taken by the Central Government has raised hopes and faith of State’s people in the statesmanship of the Prime Minister. People here, she said, believe that it is he(the Prime Minister) who took this bold step  and it can only be him who has the strength to move on and take the people of Jammu & Kashmir out of the present situation”, she said while enumerating several initiatives the Prime Minister took in normalising relations with Pakistan in the past.

The Chief Minister said the Agenda of Alliance (AoA) of the present Government has emerged as a consensus political document in last 70 years to redress the issues and problems facing the State in a democratic way. “When you (the Prime Minister) and late Mufti sahib drew a roadmap for the State, it gradually became a consensus political document to redress the issues facing Jammu & Kashmir”, she said adding that AoA has incorporated everything which it takes for redressing the issues of the people of the State. “Be it rehabilitation of refugees, opening of cross LoC routes, dialogue, opening of Sharda Peth, compensation of Indus Water Treaty losses, it has everything in it”, she said while pitching for moving forward on its speedy implementation.

Being a sensitive State, Mehbooba Mufti said, political narrative always overshadows the developmental narrative and as such needed to be looked accordingly. She thanked the Centre for liberal assistance in terms of PMDP or other schemes which are aimed at fast pacing the development of the State. She hoped that soon work would commence on Vailoo-Singhpora tunnel and other tunnels like Sadhna and  Rajdhani are also considered for execution.

Prime Minister, Narendra Modi inaugurated the 330 MW Kishenganga Hydro Electric Project which has come up at a cost of around Rs. 6000 crore. He also laid the foundation of Semi Ring Road project for Srinagar city which is expected to cost Rs. around Rs. 2000 crore.