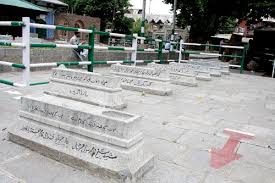 Authorities have decided to impose restrictions on public movement in areas coming under the authority of five police stations of Srinagar on Sunday.

Chairmen of both the factions of Hurriyat Conference, Syed Ali Geelani and Mirwaiz Umar Farooq including other resistance organizations have called for a complete shutdown on July 13.

An official spokesman told CNS all the areas falling under the jurisdiction of police stations Khanyar, Nowhatta, Maharaj Ganj, Rainawari and Safakadal will witness severe restrictions while there will be no curfew or restrictions in uptown.

A police official told the news agency, on condition of anonymity, that most of the separatist leaders would be either placed under house arrest or detained in different police stations.

“If the people are allowed to visit the Martyrs’ Graveyard at Naqshband Sahab (RA) shrine, it might lead to law and order problem. We don’t want to take any chances,” he said, adding that most of the mainstream leaders will visit the graveyard during wee hours. (CNS)