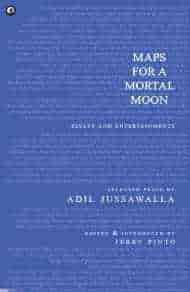 The worst thing about being a human being is being a human being. ‘I wish I was bird’, as the railway clerk in Nissim Ezekiel’s poem says. But if I were, the worst thing about being a bird would be being a bird.
Adil Jussawalla supremely talented literary world is uniquely diverse and unwaveringly at peace with others’ writing—so you read many such good pointers while turning the pages of this beautiful book. Jussawalla, a prolific poet, columnist, critic—and all together is a person in existence, for moving with the carefully chosen letters. And no one could have a better choice as an editor like Jerry Pinto to compile the selected prose of Adil Jussawalla—he is another gem from Mumbai, who kept distance from limelight to succeed on humane grounds—in writings and at personal front.

The book is uniquely rich through the essays and entertainments, mostly published earlier as well—but here in collection, those appear giving better sense of collectiveness. And on another count, this book seems getting good success in offering Adil Jussawala’s specific and less known works to the new genre of readers—and while doing this, the coverages go in great deal on language, poetry, ethics, aeroplanes, death, addiction, travel alienation etc. The protagonists of Jussawalla could be anyone and from locale—conventional or exceptional.

The book remarkably comes on Bombay of pre 1990—hence we see a greater coverage of Jussawalla’s own perspective on the city. That part charms most, especially when Jussawalla’s appearances surface in different form—from a journalist, book critic to a writer with less noise and all sensibilities. Earlier, Jussawalla has written four anthologies of poems: Land’s End (1962), Missing Person (1976), Trying to Say Goodbye (2012) and The Right Kind of Dog (2013)—and put together a great book, New Writing in India (1974).

Recalling these five books is meant to see, how elusive and infrequent this writer has been for his untargeted readers, who yet stayed incorrigible and waiting for his books. As Jussawalla’s writing and his own self is inseparable from the unusual urbane construction of Bombay—so a greater degree of attention on this city makes him a near-legendary chronicler of a certain timeframe, in which this city had seen transformative changes. Unvaryingly, Jussawalla’s writings maintain intelligent poignancy, wit, melancholy—Maps for a Mortal Moon easily gets breakthrough in following his own standard, set effortlessly.

The readers would find like winning an strategy, if they would read this book for the purpose to know the cultural shifts and political changes over the past forty years—that strongly inserted ‘change’ as virtue to be not missed. That has been fairly damaging and we see eruption of unheard complications at individual and at mass level. Both Adil and Jerry has known their city closely and in daily struggle—can same accuracy one can have on the city from living in a house cruelly priced $2billion or looking on Arabian sea from the thick glasses of Taj Hotel?

The point is not in subverting the ‘grandness’ but bringing back the issues at fore and with fair reasons. The much celebrated tag ‘maximum city’ is certainly a caricature on Bombay, which helps keeping it in a sort of euphoria, an escaping route from its ugly underbelly. Sometime directly and on occasions with smoke signals, Jussawala puts forward the complex realities, not so obvious to the species lost in efforts of saving their fragile existence. Certainly, Jussawalla is an existentialist but a maverick at same time—that reasonably keep his writings at distance from the fashioned existential philosophy.

Not to gain or lose, Jussawalla is a writer with consine—who has seen the suffering and not stopped delving with the harsh realities. This is an extraordinary accomplishment of him— and something, with which, many writers don’t go far ahead. A great gift to the serious prose readers, Maps for a Mortal Moon should be in their essential reading list. This book is one of the major non-fiction entries in 2014— Adil, Jerry and Aleph publications deserve praise for coming out with this standard project.

*
Atul K Thakur is a New Delhi-based journalist. He can be reached at [email protected] and on Twitter @atul_mdb