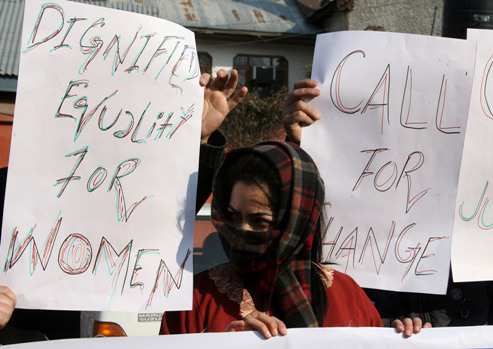 I’m a human rights lawyer, who has been living and working in Srinagar, for the last three years. I believe in the Human Right of people’s to Self-Determination and strongly support the cause of plebiscite and Kashmiri freedom from an Indian military occupation. As an Indian, whose government brutalizes Kashmiri people in my name, I believe it is my responsibility to understand and document the forms of exploitation deployed, and to oppose such actions, in whatever way I can.

In this context, some questions, occurred to me when I read your recent editorial  “Our dirty dark underbelly” in which you decry secretive ‘sex and spy’ relationships between young Kashmiri women and Indian military personnel, particularly in ‘towns and villages’ where ‘men in uniform mingle easily with the locals’, as is evidenced by ‘the recent killings in Handwara’. You state that in such liaisons, questions of ‘voluntariness, compulsions or duress are immaterial’, and these relationships are a way of ‘keeping the wheels of occupation running, and crushing in its way all forms of resistance’. You argue for a ‘sustained awareness campaign’ aimed at parents and elders to ‘monitor the abuse of mobiles by their daughters’.

Here are my questions:

I share your concern about how such relationships threaten to ‘rip apart the already damaged moral fiber of [Kashmiri] society’. From my readings, I see this as a problem endemic to all armed conflict. For instance, the Japanese military during the Second World War, used ‘enemy’ Korean Women as ‘comfort women’ or sexual slaves. The Pakistani military in the 1971 Bangladesh war, ran rape camps. The sex-work and sexual entertainment industry in Bangkok was built by the American state to service the sexual needs of American soldiers, on all expenses paid ‘Rest and Recreation’ sorties during the Vietnam war. In Kashmir, women with family connections to rebel fighters have faced intense sexual targeting, during counter insurgency operations. In all these cases, whether it is the physically violent Kashmiri case of Kunan Poshpora, where a whole village was targeted for being ‘militant sympathizers’, or the economically coercive sexual labour and trafficking industry in Thailand, women rather than armed male sexual predators, and purveyors, have been socially stigmatized for destroying the social fabric. Do you, in common with these societies at the time these events occurred, also see this a problem of the inherent moral weakness of women? Do you, as the sexual aggressors, in all these cases, would have it, see it as an inherent moral weakness of the occupied society as a whole? Or do you, since the only thing in common in all the cases I have cited is the presence of soldiers, see it as problem of the inherent violence of militarization?

I understand that there are many azaadi loving young women in the Kashmiri resistance movement, some of whom I personal know. I cannot comment on their moral character, or sexual lives, but I do know that they love their phones. In fact, I complain that they are always on their phones. On observing their phone usage, I have found they use these phones for many pro freedom activities, like outraging on Facebook and Twitter against the occupation, mourning the deaths of martyrs, organizing political meetings and protests, and posting azaadi links, pictures, messages and videos. They also use them for chatting with friends about their studies, and many other matters such as films they have watched, book they have read, food they have eaten etc. I have been told by them that they prefer to have conversations on the privacy of their phones rather than in public, since their campuses and other public spaces are always under surveillance. How do you propose in your awareness campaign, without monitoring all the cell phone activities of all girls in Kashmir, to filter out the good girls from the bad ones, and pro-resistance activities from ‘abuse of mobile phones’? What if a barely literate parent misunderstands the nature of their daughter’s cell phone usage? Would it not be wiser to impose a total ban on all cell phone usage by all women below a certain age? In fact since age is no indicator of moral integrity, should not such resistance public intellectuals as you, use their valuable magazine pages to advocate a complete ban on usage of cell phones by women?

I have read that male sexual torture and rape is rampant in Kashmir. Sometimes such torture results in actionable intelligence information ‘volunteered’ under duress. Since you state that questions of consent or compulsion should be irrelevant in our understanding of sexual contact between Kashmiri women and Indian occupiers, I wonder if this also applies to young Kashmiri men, in similar situations? Do you also propose to target your campaign at the parents whose sons have been sexually torture, and ‘turned’? In addition, some of these informational transfers take place, face to face, during torture, and not via cell phones. How, then should Kashmiri society respond to this kind of non-cell phone based sexualized control and information gathering practices, that use both Kashmiri men and women, with or without their consent?

From my personal experience, having been a very rebellious teenager, I know that parents can be quite easily fooled with reference to curfews (I simply violated deadlines for returning home) curtailment of phone privileges (I made my phone calls from the home of a friend, now with mobile phones this even easier) , locked doors and high walls (I found a way of leaving the back door unlocked and sneaking out from a gap in the compound fence, hidden from sight). Since these parental restrictions, (unlike curfews, internet shut downs and barbed wire fences of the military occupation) cannot be imposed with guns, what do you propose, be done by parents if they suspect or learn their daughters are using their phones to talk to an Indian military man. Should they immediately inform you, so that you can publicly shame them in your editorial pages to deter them from such activities? Should they inform school authorities (as my parents once did) so that their school can similarly shame and punish them (as mine once did by announcing my name in the assembly and taking away my Captain’s badge, which only freed me from the loyalties I owed to it and made me even more rebellious)? The police and Indian Army, has recently also shown an active interest in identifying, detaining, and circulating illegal videos of girls suspected of such activities. Should in this instance, an exception be made, and the otherwise exploitative disciplinary and humiliation mechanisms of the occupational state be used strategically, in the interests of the preservation of the moral integrity of our society?

Scholars of gender and sexuality (including Islamic women scholars), believe that shaming and blaming sexual women/men, whether they are victims or consensual agents, only drives such ‘activities’ underground, and makes young people, vulnerable to sexual exploitation, blackmail and violence that they cannot speak about. Further they also hold the view that consensual and mutually enjoyable sexual activities are neither dirty nor dangerous, but healthy and natural. Forced sex, and the fears of it are not about danger or dirtiness either, but about power and specifically the patriarchal power that men have over women’s bodies. They have argued that militarization exacerbates both public (that is state-individual) and private (that is, between individuals) patriarchal power and violence, and results in the greater subjugation and moral policing of women, by both state and community actors. I must confess that I find this view very persuasive, and see your editorial as a very good example of this phenomenon in action. I have a female Kashmiri friend, who believes that not talking about the patriarchy, strengthens the occupation. What would you say to people, like me and her, who believe that we should instead of shaming young women and monitoring their phones, learn how to create an environment where young people feel more comfortable sharing their sexual experiences, violent and non violent, consensual and forced, cell phone related and not: ranging from everyday sexual violence such as being groped on a bus, to the existence of a ‘special friend’ or ‘crush’ to whom they are attracted, to an army man buying them gifts, speaking to them on the phone for hours, and asking them for private meetings?

How would you respond to the assertion, that such honesty can help protect vulnerable people from exploitation, by allowing for more informed social, political and familial interventions (where required), far more effectively than any blanket monitoring, moralizing, blaming or shaming? Do you feel that designating particular young women as ‘dirty’, and circulating insinuations and rumors, that originate from the police’s CID department, and have been repeated directly to the minor girl in question herself, by police and state representatives such as Nayeema Mehjoor, you are in fact being used by state agencies in their dirty war in Kashmir? Do you disagree with the assessment that dividing communities, families, genders, women, villages and cities into good and bad, dirty and clean; and thus destroying the social fabric based on moral hierarchies, is a favorite tool of all kinds of oppression, and can, and is being exploited in this case by the Indian state which is always keen to manufacture and sustain such differences?

I do hope, you will respond to these queries at your earliest convenience.

The author is a human rights lawyer and researcher based in Srinagar. She is a member of the Solidarity Group for Handwara Minor Girl and tweets @shrimoyee_n