Legal aid is the right of each PSA detainee 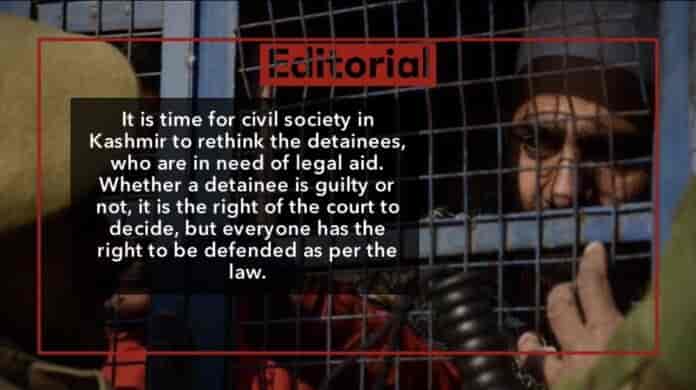 In Kashmir, detentions under Public Safety Act (PSA) have been so common that there are often hundreds of cases pending, with families seeking the whereabouts of their relatives. In the post-August 2019 months, several families had to file Habeus Corpus petitions to find details of their jailed relatives. While Kashmir doesn’t have many legal aid cells, there are only a few lawyers, who take such cases, mostly without any self-interest. These lawyers have been instrumental in providing help to hundreds of families, who can’t otherwise seek legal help. Often people can be seen waiting at courts for hearing, while a person is in jail somewhere far away from their native areas. In the last one years, the PSA has not only affected people who were booked under the law but also majorly done so to their families. As per the available data, at least 16,329 persons were booked under this law between 1988 to 2015, and especially in 2019, at least 662 persons were booked under the “lawless law” – as categorized by an international human rights watchdog, Amnesty International. Most of the detainees have been found to be in their youth. The government also uses the law against the political leaders, as was evident in 2019, when dozens of politicians were booked. It is time for civil society in Kashmir to rethink the detainees, who are in need of legal aid. Whether a detainee is guilty or not, it is the right of the court to decide, but everyone has the right to be defended as per the law. In these times, and the data we have, lawyers as well as people, in general, should take this matter and either strengthen existing legal aid cells or build strong legal aid institutions that can come to people’s help. Without such legal aid cells, there are hundreds of desperate families, waiting for their detained relatives, without any hope of return.

Previous articleHighway uncertainty must end once for all: Stakeholders to Parliamentary delegation
Next articleL-G Sinha chairs first Unified High Command meet in Jammu