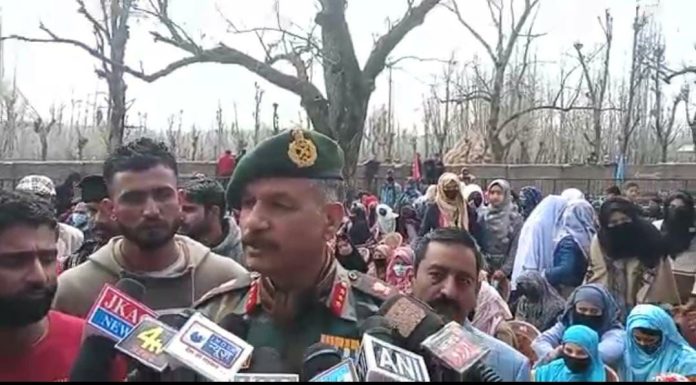 Stating that the north Kashmir’s Kupwara district has borne the brunt of violence over the past many decades, General officer Commanding (GoC) of Srinagar-based 15 Corps Lieutenant General D P Pandey Monday said that as of now and especially for the past few years, the district is militancy free and most peaceful area of the Valley.

“Kupwara was the worst hit by militancy and violence. But today, and for the past few years, the district is peaceful and people are living in a peaceful atmosphere as they have rejected the violence. This area was once a hotbed of militancy but of late, people of this place are enjoying the peace,” Pandey told reporters during his visit to Kunan, Trehgam area of northern district of Kupwara after inaugurating a Computer Centre  and Nursing Home.

He also interacted with students and locals of the area.

He said that the there is an atmosphere of peace prevailing in entire Kashmir and the security grid is fully prepared to deal with any situation.

“Operations are being carried out wherever we get inputs of militants hiding but it was the collective responsibility of the society to prevent killings of security forces personnel who come to their homes on leave and also to stop youth from treading the wrong path.”

“On the LoC, we are alert to foil all possible infiltration bids,” he said.

He said that local militant recruitment was much less this year compared to previous years. (KNO)