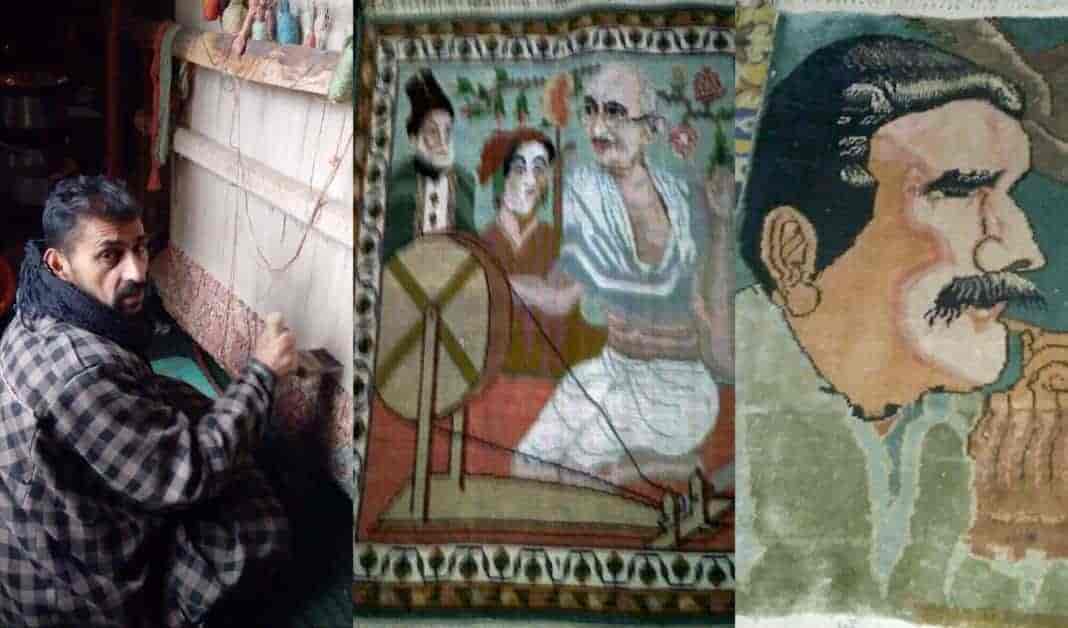 When the conflict was gripping the Kashmir valley in ‘90s, and youth were forced to recce the streets, then 15-year-old, Ghulam Ali Sheikh, started trying his hands on handicrafts and carpet weaving.

Mr Sheikh, 47, gave his entire youth to the art of carpet weaving and has made remarkable innovations in the field to bring significant changes in this art. He started his journey in teenage, by joining the government established carpet center. “But, they used to produce simple and plain carpets that would hardly attract buyers,” he said. Though, he continued his job for two years to sharpen his skills, and later walked out.

In the meantime, he remembers a time in that factory when he tried to make a design on carpet, “As soon as I made a change, all other trainees gathered around me,” said Sheikh, sitting in his orchard. “I felt that I have done wrong and deserves punishment for it. I got panicked when the officer penned my name. But, a day later, I was called to Kulgam Tehsil and received an award of two hundred rupees and a certificate.”

As Mr Sheikh puts it, earlier the carpets used be too simple to attract the art lovers, but he changed the entire scene and has made government sponsored visits to different places to display his art.

After that he started working independently, and in the first attempt, he made carpets with two monkeys, one eating maize and other banana, with the exact colors in them. “I was determined to work and try something unique,” and his first attempt fetched him the appreciation and certificate as well.

His masterpiece in carpet artwork includes the pictures of, Holy Kaaba, Ayatollah Khomeini, Mahatma Gandhi and many more. He tried to motivate about six-hundred people to continue this artistic work, but everyone left. As he said, this work couldn’t pay them enough to make their ends meet. The artists suffered a lot, and they eventually changed the livelihood.

He is native of a small remote village, Shahoo in Kulgam district of South Kashmir, about 70 kilometers away from the summer capital Srinagar. Sweating out in his apple orchard, and collecting firewood for chilling nights, he admits that even he can’t feed his home with artwork alone.

“I have made so many portraits, some of them even fetched awards for me.” he said, recognizing his efforts that made him a significant figure in carpet weaving art in the conflict-ridden state.

Earlier, he had decided to make thousand rupees note on carpet, but as soon he prepared the template, Modi-led central government made the ‘thousand and five-hundred rupee currency notes, a worthless piece of paper’. After that, he made a double-sided carpet, with discarded thousand rupee note on one side and Prime Minister Narendra Modi in the lotus flower on the other side, with the image of late President APJ Abdul Kalam on it as well. He has sent it for national award this year, hoping that his efforts will fetch an award.

“It was a blessed job and even the money was good, but eventually it started affecting us badly as it required patience and hard work, which, unfortunately, lacks in the current generation,” said Mr Sheikh as he adds his worries about the danger on artwork’s existence.

He also tried to start his own carpet business, but due to less demand in the market, he suffered a great loss and was forced by labors for the payment. Left with no option, he sold his land to come out of the debt. “Nowadays, I work alone. Sometimes, my wife helps me, as I have trained her as well.”

Displaying screenshots of him making to the media, he narrates about how his attempt in a Kerala-based competition to make double-sided carpet, a portrait of Poet Allama Iqbal on one and flowers on the other side, fetched him the first prize.

As per him, government should promote such marketplaces to sell the products, so that the art would not only be preserved, but enhanced as well. But he denies any such move by the state administration.

“Though, I will continue to preserve this art, but at the same time I wish that, if government takes a bold step to preserve the carpet weaving industry, for which our Kashmir is known worldwide, it will benefit everyone. I have been waiting for years now,” he said.

As per Mr Sheikh, the market of hand-made carpet suffers because of the machine made carpets, which according to him are available at low prices, but lack in quality.

Mr Sheikh was offered a job by former chief minister, Omar Abdullah back in time, but his illiteracy disqualified him. “He (Mr Abdullah) promised me to adjust me in Handicrafts Department only if I were literate,” said Mr Sheikh, and taking deep breath, he continued, “but I was not.”

“After that, I managed to pass the tenth standard exams, but that opportunity never came again.” Mr Sheikh continues to wait for an opportunity.