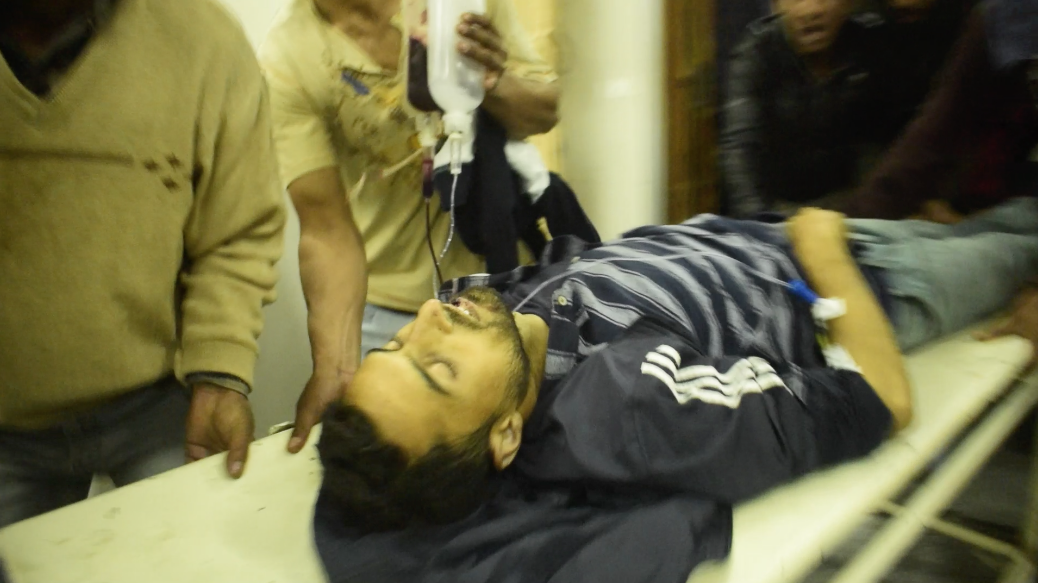 by Peer Haseeb and Sarwat Javaid

In Kashmir, this Sunday, 21 October 2018, the road from Kulgam to nearby hospitals was buzzing with sirens of ambulance, transporting injured civilians from a gunfight site to hospitals.

By the end of the day, three militants of Jaish-e-Mohammad and seven civilians were killed and over 43 were injured, who are being treated at District hospital Anantnag, Kulgam and SMHS hospital in Srinagar. Civilians received bullet, pellet and splinter, of a blast at the gunfight site, injuries.

The Kashmir Walla visited the SMHS hospital in Srinagar to meet the injured and their relatives.

“I had my eyes on a young boy, who was washing his face in a stream nearby,” said Younis Khan*, an eye-witness said at the SMHS hospital. “As the explosive blasted, the blood oozed out of his head.”

Khan looked around only to encounter more explosions around him. Soon, he saw one of his neighbouring children, or as he said, ‘like his own child’, Auqib Shamshad Ahmed.

Sixteen-year-old Auqib received severe injuries on his neck and abdomen. Being the eldest son in the family, he was preparing for his upcoming class 10 board examination. He was heading towards his tuition classes when the explosion happened.

“I took him along with few more victims, among which, Mansoor Ahmad, died on the way to the hospital for treatment,” he added.

Khan claims that there were neither any government officials present at the site when he witnessed the explosions, and nor any of them were warned about the explosives by any means.

Shamshad Ahmed, father of Auqib, said, “My child is a regular student, he never picked a stone, leave protesting. He knew that he has to take care of his father and family in future”.

Currently, Auqib is being operated at the SMHS.

Amid the pool of mourners, another mother was waiting to see her son, since he got injured. Her son, Faizan Bashir is a class 7 student, struggling with multiple pellet injuries.

Adding to the pity of dead bodies, the fear which looms above the misery is the fear of identification. Many relatives refused to talk in an eye of suspicion.

Requesting the anonymity, one of the pellet victim’s relative said, “They could do nothing but say things. Everyone knows what happened but nobody will speak; they fear and they will speak whatever police allows them to disclose. Truth is kept behind the curtain.”

Another disarrayed local, running along with patient stretcher in the corridor said, “Police didn’t warn us. We can’t accuse anyone specifically, and we can’t file FIR either. It was government forces for sure, but now what?”

Accusing the state, the young boy asked, “Why were there stray explosives? They want to kill all Kashmiris!”

Mother of Mohammad Waseem Khanday, another victim of the incident from Tulinowpora, Kulgam said that the Army men had placed the explosives on the road which led their children injured.

“My son has pellet injuries too. His face, nose and right arm got severe injuries,” she confesses that doctors have refused to take the responsibility of the eyesight.

By now, the total number of civilians killed on Sunday is seven. Many are still at the hospital.

“Everyone who died in the incident were my children too. Today, they died, someday it will be my child and someone else’s the other day,” said father of an injured.