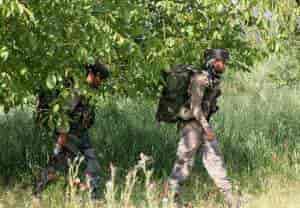 Two militants have been killed in a gunfight with goverment forces at Kreeri area of North Kashmir’s Baramulla district on Thursday.

Earlier the gunfight broke out after a joint team of army’s 52 RR, SOG and CRPF had launched a cordon and search operation at Athoora area of Kreeri.(GNS)