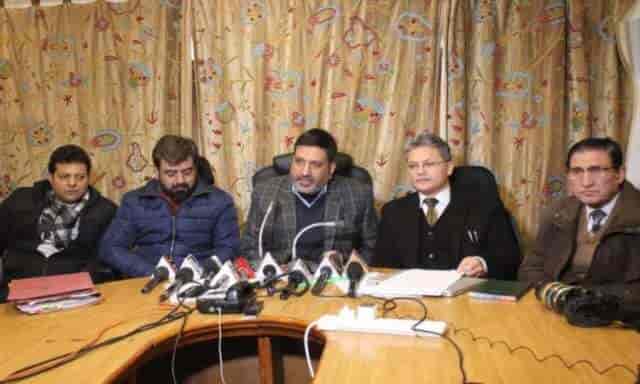 The Kashmir Chamber of Commerce and Industry Tuesday expressed their outrage on  mob attack on Kashmiri shopkeepers in Rohru Tehsil, Shimla.

The miscreants, armed with hammers, sticks and iron rods have reportedly broken the shutters of the shops and looted and ransacked the goods.

“We have been watching with growing concern, the selective targeting of Kashmiri businessmen, especially Handicraft dealers/Pheriwalla’s on social media through videos of hate speeches and physical violence, some exhorting people not to buy Kashmiri goods. To our knowledge, no investigation or action has been taken in any of the incidents. A hostile environment is being created and attempts made to stoke sectarian violence in various places across the country.”

“The incident in Shimla is the result of the hate propaganda and we appeal to the Hon’ble Prime Minister of the country to send a clear message for safeguarding and protection of businessmen and students from Jammu and Kashmir wherever they may chose to be.”

“The KCC&I demands that the Governor’s administration depute a high level special team to Shimla including representatives from the KCC&I for assessing the losses and to ensure that the lives and property of Kashmiri Traders are safe and secure. We also humbly appeal to the saner elements of the society, including members of the business community, intellectuals, intelligentsia, civil society and others not to remain silent. It’s the responsibility of all secular minded members of the society to take steps to protect the rights of Kashmiri people to freely conduct their businesses anywhere without fear or intimidation.”

“The KCC&I also demands that the guilty should be booked under more stringent provisions of criminal law. We find it strange that despite videos of the vandalism readily available on the social media, the Himachal Police has failed to make any arrests so far. This clearly points to goons being patronized by the State, which is deplorable. Such incidents cannot be allowed to be business as usual and remedial steps need to be taken for avoiding their repetition anywhere else.”

“While the KCC&I appreciates the decision of the Himachal Police to engage the services of forensic scientists to “scientifically probe” the episode of killing of a bovine animal; we believe that it would also serve the ends of justice to take action against the miscreants who have openly indulged in taking the law in their own hands.”

“The KCC&I also demands that the Jammu and Kashmir Police register FIR’s and take legal action against people indulging in hate speeches and physical violence and freely spewing venom on the social media against members of the Kashmiri business community operating throughout the country.” (CNS)