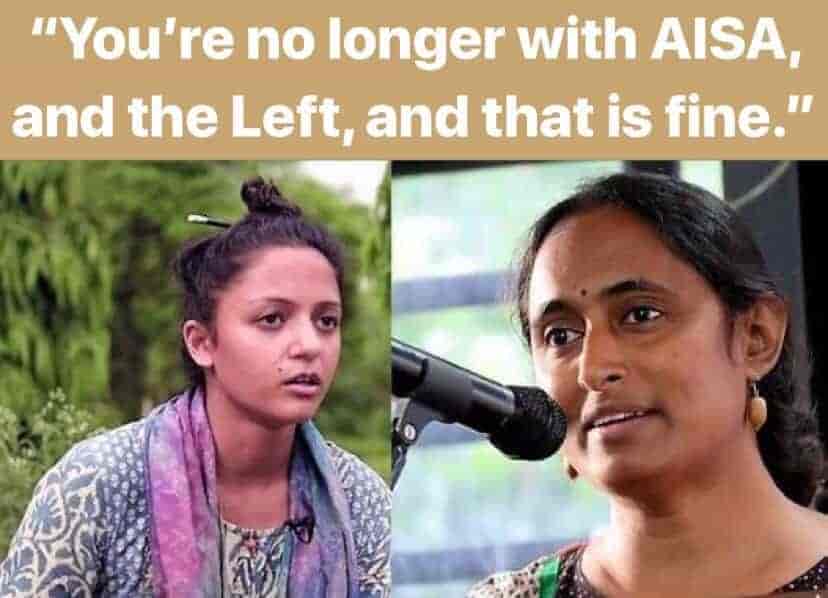 Rashid had recently congratulated the newly elected Mayor of Srinagar city, Junaid Azim Mattu, after winning the elections with 40 votes out of total 74. Mattu has himself acknowledged the support by the BJP in winning the Mayoral elections, saying BJP is a reality that can’t be ignored.

Krishnan is also a member of the politburo of the Communist Party of India (Marxist-Leninist) (CPI-ML). Rashid rose to fame through her anti-BJP politics in the Jawaharlal Nehru campus post-Afzal Guru anniversary protests.

Krishnan, who is also the secretary of the All India Progressive Women’s Association, told Rashid in a tweet, “You won appreciation & goodwill for your role in the movement defending JNU against BJP. You’re no longer with AISA & the Left, & that’s fine, your choice. But it’s unfortunate to see this kind of tweet from you.”

Krishnan has been vehement opposition to the BJP policies and anti-student polices at the JNU campus. In several protests, Rashid and Krishnan have addressed the gatherings together.

Does ‘young, educated’ & waste management wipe out BJP backing?! You won appreciation & goodwill for your role in the movement defending JNU against BJP. You’re no longer with AISA & the Left, & that’s fine, your choice. But it’s unfortunate to see this kind of tweet from you.

Last June, in an interview to The Kashmir Walla, Rashid had said, “[Narendra] Modi government is unleashing total anarchy. And at the same time, the central government doesn’t have Kashmir policy to speak of, and that has to lead the entire state in a biz.”

After rising to fame in Delhi during student protests, Rashid returned to her hometown Srinagar to look for prospects of joining National Conference (NC) party and get a Lok Sabha candidature. However, according to well placed party sources, she wasn’t able to convince everyone in the party, including some veteran party leaders.