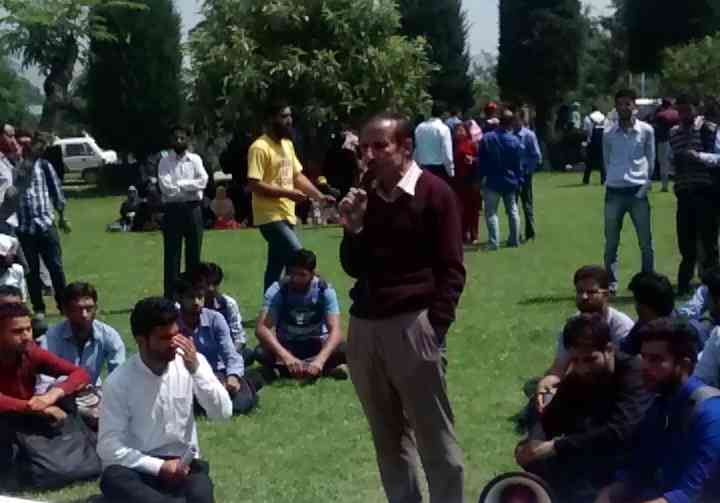 Kashmiri students today gathered to remember more than 120 people, mostly teenagers, who were killed during the mass uprising in 2010 in Kashmir. The gathering was organized by the Kashmir University Students’ Union (KUSU) in the campus.

A gathering of students from the campus and outside marked the day by assembling near Iqbal Library Lawns in afternoon. The university authorities, however, had shown stiff resistance against the event which led to the heavy deployment of police all around the campus.

“Even this didn’t deter the students from joining the program. Some of the students were intimidated and pressurized not to join the program through their Head of departments,” KUSU said, in a statement.

Mohammad Ashraf, father of Tufail Ashraf and Farooq Ahmad, father of Wamiq Farooq, whose sons were among the killed in 2010, addressed the gathering.

Expressing their dismay over the justice system, their parents said they have been made to run from pillar to post but of no avail. The students expressed their solidarity with the families of those who were killed by  at the government forces.

Students also spoke against the Indian army’s aid to the varsity under Operation Sadbhavna last month.

A few students also pointed out to the police-public cricket league that has varsity grounds as one of the venues. “Their hands are stained with the blood of our martyrs. Their public relations’ programs will not in any way wash away their crimes they have committed against Kashmiris,” the students said.

The gathering was marked with the continuous sloganeering, holding banners and placards in support of Kashmir’s freedom struggle.