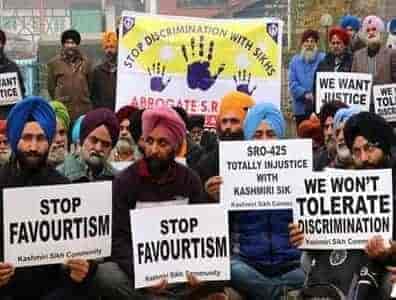 The Sikh community  of Kashmir on Monday held a protest demonstration against the SRO-425 which they claim ‘favours Kashmiri Pandit minority only’, Greater Kashmir reported.

As per the report scores of Sikhs assembled at Partap Park in Srinagar and held a sit-in protest while carrying banners and placards seeking the revocation of SRO-425.

All Parties Sikh Coordination Committee (APSCC) chairman Jagmohan Singh Raina termed the order as ‘conspiracy’ to divide minorities in Kashmir, saying the order must be revoked at the earliest so that Sikh minority community must also reap the job benefits announced by New Delhi.

“New Delhi had announced a job package for non-migrant minorities in Kashmir. But for four years the government kept the order under the carpet and suddenly came up with SRO-425 to benefit Kashmiri Pandits only,” Raina was quoted as saying by Greater Kashmir..

He said the PDP-BJP government  manipulated the job package order to benefit a particular community rather than all minorities who suffered from past 30 years due to turmoil in Kashmir.

“We recently met chief secretary and advisors to governor and briefed them about the discrimination meted to us. We asked them to rectify the order which was manipulated by successive regimes. This order is a conspiracy against Kashmiri Sikhs,” He said.

The Sikh community threatened more protests if the order was not revoked at the earliest.