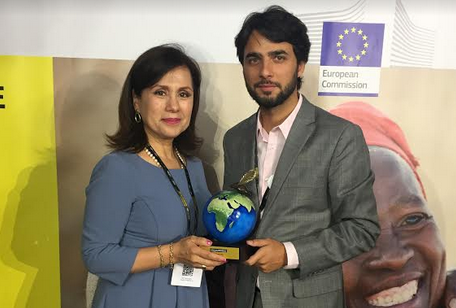 Khan collected the award in Brussels on Tuesday at the European Development Days ceremony. The award winning story, in Europe/Junior category, is about a school teaching underprivileged children in Delhi under a metro bridge.

An excerpt from the story reads, “But since 2011, one man in the capital Delhi has been teaching any children who show up, and preparing them for state exams. The children often live in shacks in slums. Now other volunteers have started joining him to teach as well.”

The Natali prize, every year, rewards outstanding reporting on issues such as poverty eradication, and the economic, social and environmental dimensions of sustainable development, as outlined in the new European Consensus for Development. The award is for journalists from Africa; the Arab World and the Middle East; Asia and the Pacific; Latin America and the Caribbean; and Europe.

Khan is an independent documentary photographer and a radio journalist based in Kashmir focusing on South Asia. He has done photo and video commissions for BBC, Al Jazeera, The Guardian, Carnegie Council, Yale Journal, The Christian Science Monitor, Getty Images and many other publications.